The Patch of the Year

Ladies and Gentleman, A Standing Ovation for Verant Please 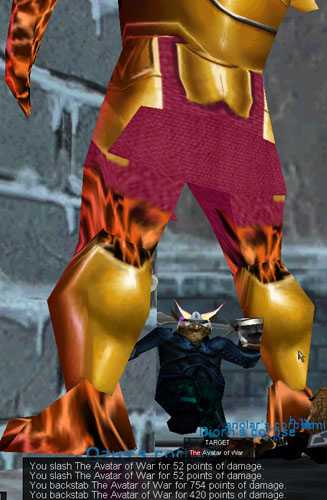 Papatank gets a shot at the AoW finally

My hats off to the folks in San Diego.  Simply an amazing patch.  People try to credit (or blame) me for many of the changes.  That's fine.  I'll take credit or blame.  But the truth is I think many of the changes that went live today were simply wise design choices.  Sure, I am a vocal mo faka and am not afraid to speak my mind.  I post my opinions here freely.  But my opinions were based upon many hours of gameplay, discussions with my guildmates, and discussions on various messageboards.  So while it was fun spending the day recieving tells such as these. . .

. . the fact of the matter is I was not the only one who felt the end game had become a giant clusterfuck with predictable spawn times, wasted trigger mobs and the overall gimpification (I'll coin that phrase) of many mobs.  What's funny is, that second quote I posted couldn't be further from the truth.  Gone are the days of mass ToV farming by one guild.  Gone are the days of time zone domination.  If you have skills and determination you will be rewarded.  If you worked hard and killed mobs first, you will be rewarded.  If you were hoping for the free-loot festival to continue in places like ToV, well tough luck, homies, that's what you get for riding other's coat tails.

Oh and hot damn -- the new AoW spawn trigger is simply brilliant.  Thank god.  For those of you who don't know what I am talking about, there is now a trigger mob for the AoW.  And the best part is -- HE DROPS NO LOOT.  There's no reason to kill him!!!  We didn't want to compete with other guilds for the Statue.  Now those guilds can go kill Vindi and Statue in peace.  And we don't have to wake up and find out that yet another AoW was left sitting lonely in Kael for 45 minutes.  Absolutely brilliant.  THANK YOU VERANT.

So speaking of AoW, we didn't know about the whole trigger spawn thing so we headed there as soon as the server was up.  We teamed up with our homies, Shock of Swords, and downed the AoW yet again.  The loot was nice -- a ring for Rathji, legs for Siak and Kyntaro and the newly upgraded Blade of Carnage to Bzul and Falis (well one of those was from my bank account).  Hahaha by the way, I read that some of you retards on other servers sold your BoC's for Peridot money.  Rofl -- GG.

Sorry if I am giddy as a girlscout.  It's just that the future of EQ is looking very damned good right now.  Some VERY nice changes that should make life at the higher levels much more pleasant for everyone -- unless of course you depended on your time zone or the ease of mobs to achieve success =P

Ok, so here are some more NON-blown spawns of the week!!! 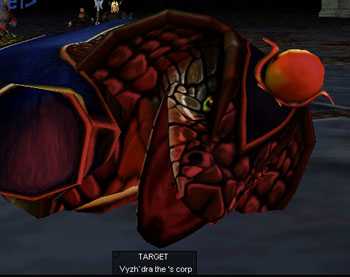 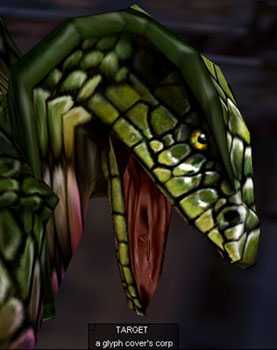 Glyphed died and the newly named, Glyph died as well

And by gosh by golly -- what dropped -- ENCHANTER ONLY and CLERIC ONLY loot (why does that ring a bell?):

Ok wait a second.  The good thing is there is now new ENCHANTER and CLERIC only loot.  The bad thing is it sucks -- horribly.  Maybe next patch VI will upgrade these to something our enchanters and clerics would actually use.  But a step in the right direction!

We also got this thingy which is not so bad considering the FT fix:

Anyway, I can't get the smile off my face.  Feel free to flame me all you want.  I really had nothing to do with this stuff, I just express my opinion.  I've probably set the all time record for hate tells in the past 48 hours (yeah, we had some drama pre-patch).  Sorry to all the moo moo farmers out there.  Try Legends if you're still looking for the easy loots.

Oh and one last thing, everyone just chill the fuck out over Vulak.  I'm sure we'll see him or his too-good-for-the-game loot sometime again soon.

FD of the Day