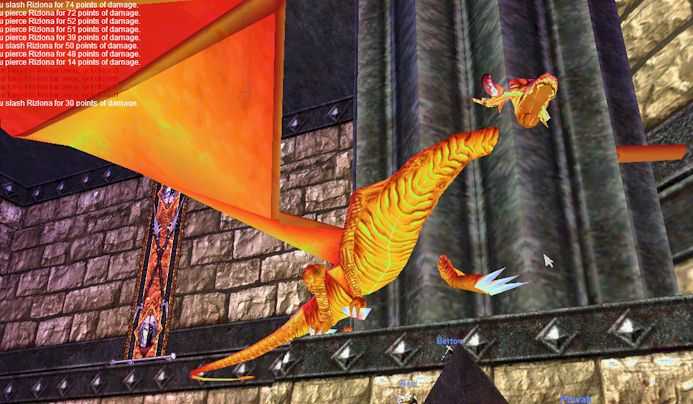 Between Christmas, New Year's, me taking a few days off and us sucking, it's probably time for an update. I'll be honest, I was struggling with what all to write about, but thankfully VI came through for me with a simply brainless patch a few days ago. More later, I need to let the hate and vitrol steep.

First off, let's examine the level 63 bard AA, Boastful Bellow, not be confused with our L12 song of the same name - gogo Creative Design Team. For the uninitiated, it was designed as a means to tag mobs - it was insta-cast and did 1-50 damage, randomly, and could 0-sec stun (interrupt) creatures L60 and under, which at L63+, amounts to moss snakes in SRO. The ability had a 18 second recast, and was of moderate MR resist given its two components. All that was incidental to simply tagging a mob for aggro, something bellow excelled at - what bellow did not do, however, was make a check for distance or line of sight, and to boot, was usable under circumstances not ordinarily possible, most notably invis and DA. Having said that, please read on, lest you jump to the same rash conclusions VI did with the knee jerk asinine nerf that follows.

If you're not familiar with aggro and pulling, for a tagged mob to deviate from its normal behavior, be it wandering or static, the person aggro, must be in the chase radius of a mob - this has been the case since RoK, so any sort of fears, for example, about a bard tagging from across the zone and having the mob come solo aren't valid - oh, how I dreamed of getting Trak to the IZ during prime time... but no one levels there anymore and I digress.

I can fully accept unlimited range wasn't intended, and the things I've done tagging through invis or DA have been very ccc, but VI's answer was to nerf the ability down to an 18-second recast spell, with 200 range and to require line of sight, without ever once thinking why it was in its original ability form. Let it soak in: 8 AA points for 0-50 damage every 18 seconds at 200 range - wtf? I'm not sure what prompted such a severe nerf, but in its current form, that's simply brainless - the retardedery is overwhelming.

And yes, I'm very pissed off.

What's really the kicker is how insulting it is VI again doesn't have the sack to mention such a big nerf in the patch message - there were fucking press releases and paid counseling sessions for the bereaved when they nerfed manaburn not nearly so hardcore as bellow, for Christ's sake... or maybe, just maybe, VI just forgot about bards, again, eh, Absor? I dunno what the case it, you tell us.

Glad I have throwing max'd, but since I chose wood elf, I can't use those 250 range javelins designed for monks never meant to have long range attacks. That's good though, because I don't want to use javelins, and I don't want a token increase in range to 250 - I don't want to think I spent 2+6=8 AA's to get a few hundred plat worth of free ammo. I don't want a points refund either - I want VI to fix the ability. More to the point, for 8 AA points, this tagging/pulling tool only available after L63 ought to be extremely useful; as has been pointed out, as you must be in chase range for the mob to come in RoK/SoV/SoL/PoP, the range issue was not an exploitive pulling mechanism.

Anyhow, ideally, I'd ask bellow to be restored to its original form, but I'm trying to give up my crack habit, so instead, I'd grudgingly accept bellow as a 3/3/3 ability, scaling with 200/300/400 range - and not as a spell. Bellow should not be usable while DA, and it should break invis - sorry Selo's 51 pullers, get DMF or use your SS boots. At 2+3+3+3=11 AA points total, if anything, we'd be paying too much for a knee jerk stealth nerf that really shouldn't have happened, but at least we'd have a usable tool back.

Since I've whined this much, I might as keep on rolling with it (since we haven't killed anything of note recently due to a wonderfully buggy RZ script on Nameless - I guess sometime after the 9th TZ you just have to give it up for the night - I love how the guides won't promote a problem to GM staff after not one, but three guilds petition daily for weeks, too), which brings us to bard Elemental armor.

Don't get me wrong, the stats are great, and I'm not even going to bitch about the effects, even if they are gimp in comparison to right click avatar and oh yah, I want my flowing thought back. No, what I'm concerned about is the apparent path VI's taking as a way to uncouple bards from their epic, which has been surgically attached to the off hand since RoK. The epic, with its 16/26 ratio, was nice then, but 3 expansions later, it's showing its age. The only reason bards continue to use the item is the instrument (all) and singing modifier bonus conferred to songs - to lose that would be a tremendous blow in terms of song efficacy, not to mention the automatic check for instrument-required songs. The upgrade path VI has finally chosen is to place an identical instrument type (percussion, string, &c.) or singing mod on individual pieces of armor. This looks good on paper given how nice the armor's stats are, but taking the long view, instead of being slaved to one piece of gear in the offhand, bards become tied to many pieces of gear in at least 5 armor slots. With the rumored expansion(s) still to come, and no one having fully exploring the drop tables for the elemental planes, let alone entered Time, how much worse off will things be?

What shows another glaring unfamiliarity and/or discontinuity between the EQ teams is the bard PoP AA Ayonae's Tutelage, which allows the max song mod softcap to be increased - yet with identical song mods on new equipment as the epic, hitting the RoK song cap remains impossible except under 2 narrow circumstances - one of which involves the use of a 2 minute duration, 72 minute recycle disciple. So uhm... yeah. Don't even get me started on Extended Notes.

So what would I do? I'm so glad you asked.

I personally reject the most common suggestion I see floating around, that of allowing the epic to go in the range slot - you're still binding bards to a piece/set of equipment to be balanced, breaking one of the core rules of gaming in my book. What I'd perfer seeing is a well thought out quest to unlock a hidden set of Masteries, call it Mastery of Voice, Percussion, Wind, String, Brass at 3 AA's each for an epic level mod, and once completed, something like Puretone to allow the bard to use songs normally requiring an instrument without such - for those keeping score at home, that's 18 AA points total. Each expansion, starting with PoP, would then use Ayonae's (Advanced, and so forth) Tutelage to increase both the mod and softcap across the board on par for that expansion. By freeing up the devs and the players from the onus and imposition of *required* bard specific items, it's a win-win situation all concerned.