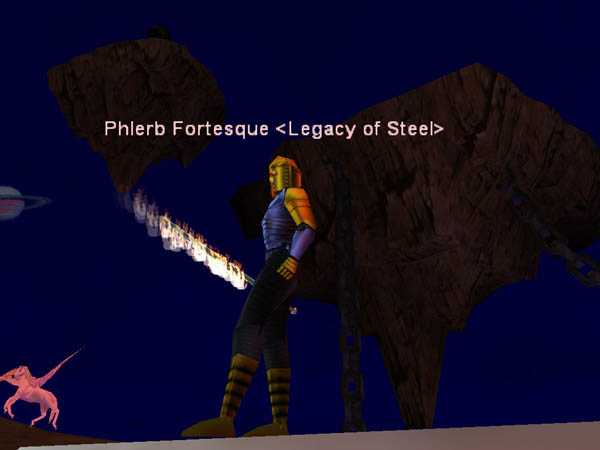 Was a proud moment for all of Legacy of Steel as Phlerb Fortesque, Palladin, hero, Deepwater Knight, the man who put HG in HGS . .I could go on forever. . .approached Inte Ikera and was awarded with the highest sign of accomplishent for any pally, the honor of wielding the famed Fiery Avenger.  Congratulations from all your guildmates, Phlerb, we know you'll make us proud -- now. . . mana song please.

We spent a little more time in the Plane of Air today.  Somehow the following picture seemed to sum up some of the "logic" that was put into the Plane.  Take it as my symbolic, pictorial representation of The Vision (tm) as it pertains to Plane of Sky. 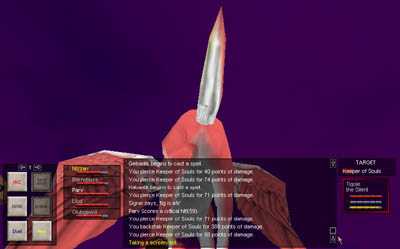 Keeper of Souls or a Horse's Ass? What's the difference. . .

Anyhow, we were fortunate enough to get a quest item from the KoS that will finish one of the druid Tests.  Ezeekiel was more than deserving to loot the mantle, many congrats to him.  Lots of other stuff dropped, I probably should be a good reporter and talk about it but truthfully so much time in Plane of Air is spent. . . hrm. . . "dealing" for lack of a better word, I just handled the tells as they came in and fought the urge to conquer the bottle of Johnnie Walker Black that's been challenging me to a duel all week long. . .it cons red and scowls.

But I digress. . . we killed some birds. . .we killed some bees. . .hey what's up with that?  Amazingly enough the Spiroc Lord dropped the ultra-rare NOTHING.  We were so busy arguing who should be awarded this godly loot that our highly treasured NOTHING rotted.  We'll just have to make it a point to come back and kill the Spiroc Lord again so we can equip the rest of the guild with NOTHING so not everyone is bickering about favortism and what not.

Tomorrow, we'll be killing bees, drakes, hands, eyes, all the good stuff.  Sister of Spire.  Unfortunately, yours truly will be gone for the day so there might be a lack of an update unless someone steps in and takes over for me.  Worst case, I can just post some old screenshots and lie about what happened.  Fiction is usually far more interesting that the truth anyway.

Congrats again to Phlerb -- you made us proud.