Egads.  I'ma take some heat for that one.  Price you pay, I guess, for cutting edge journalism.  We all know that you "females" running around calling everyone Hun and Sweetie are a bunch of hairy bastards sitting around waiting for G-String Divas to come on HBO because your too cheap or lazy or embarrassed to buy some real porn anyway.  God only knows why you put on the Hun-Sweetie act. . .even more perplexing is why most of us retards buy into it.  Well, enough of this pontificating about what is in fact the very seedy underbelly of HGS. . . .Let's get to the update.

Trakanon.  Yes, the big green monster is dead.  Again.  The Protector was especially bitchy tonight.  Apparently, someone forgot it's anniversary, left the seat up, mentioned the increased size of her thighs. . .I dunno what it was. . .but damn she was stubborn.  But, when all was said and done, the lewtz was phat.  Case in point, check out the Golden Dorf, Signel Osmadi! 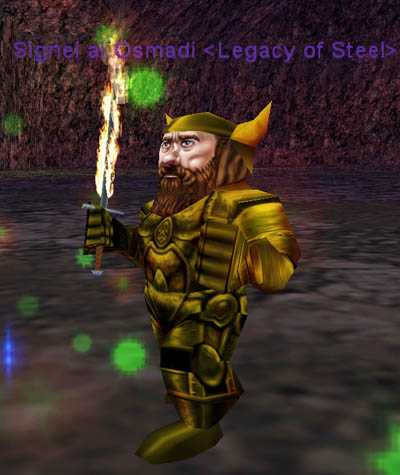 As if decking the first Dorf on the Nameless wasn't great enough, we also got to put the first troll in Cobalt, KEKE Dabadoo: 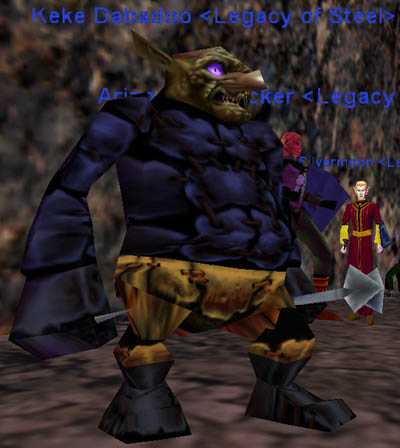 Jumpalot dropped some different loot for once as well.  Monq was awarded the Peacemaker.

There were some other highlights of the day.  Gandalfina put together a crew to take out Vessel Drozlin, bringing her yet another step closer to gaining her Staff of the Serpent.  Also the Wizard Best of the Best took place.  All of our wizards made us proud, Nyannyan going all the way to the finals, but ultimately Sirc took the title.  We wish it would have been one of our own but we wish Sirc a hearty Congratulations and best of luck representing the Nameless in the finals.  Tenaj, my main homeslice, would have been a contender as well if he hadn't accidently nuked himself to death.  We love you, Naj, and thank you for possibly the best comedic relief of the evening.  I had a nice little chat with Guide Velchior in Trak's lair about it. . . 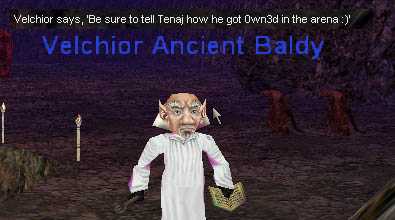 I'm sure you feel a whole lot better now.

Well, today is supposedly the big patch we keep hearing about.  The same patch that's been delayed 3 times already and then some.  I probably should update the page once the patch message is out. . .maybe I will.  I really have no comment on the patch at this point.  It's more like, Batten down the hatches and prepare for the worse!  God only knows what Verant's gonna cook up now. . .First thing I do when I log in is check all my weapons and armor and pray.  Good hunting everyone!

"So fucking what if I cant your inglish good! I dont give a fuck u cooksucking fuck."

This was directed at me in a flame war that occured when I attempted to buy a Tranix Crown on the Nameless Tavern. jeje? God Bless Everquest.