Well, you'd think from the amount of tells I've been getting that I was the news director for the Associated Press on Election Day and I had failed to inform the nation who the new president is.  Oh wait, that's not decided on Election Day anymore. . .Anyway, here I am, updating the site so a large dose of STFU is in order.

Really, how do you follow up clearing Veeshan's Peak?  I could post pictures of the two gods we killed. . .our raid to the HOLE. . .etc. . but nothing is going to hold a candle to seeing Phara Dar die.  Hrm.  I was dead nekkid in the Overthere Outpost when Phara Dar died.  But I read the guildchat dammit.  I was living vicariously through my homeboys.  So rather than post pictures of shit I saw die at level 47 when I was in full ravenscale, spiked collar, wielding dual (that's right not one but TWO) serrated bone dirks, I'll stick up some random. . .crap. . .and be done with it. 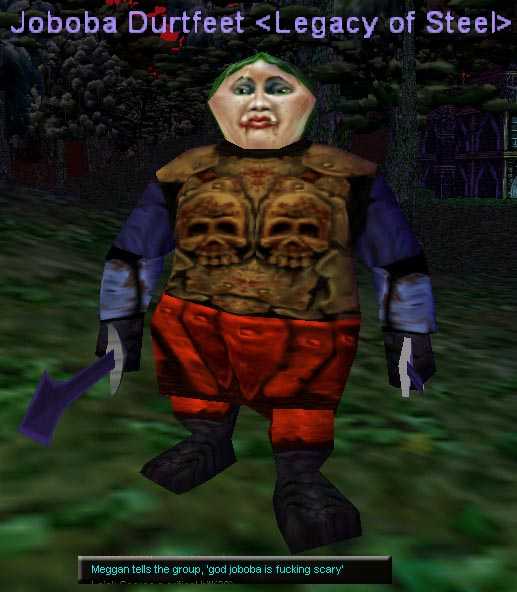 Joboba, inventor of the Soft-Off (tm)

Here's what I get to deal with on a daily basis:

According to Debo, this isn't even funny.  But with a sick sense of humor and lack of maturity, you just might find it worth a giggle.