Let's be honest.  No one wants to group with you and your shitty modem anyway.  You're probably that cleric who goes LD every 5 minutes while the rest of us die while you stare at "You have been disconnected", AGAIN.  Get a new modem you lazy bitch.  This is the twenty-first century.  Sure, blame it on Tigole's updates. . .too many images, too high of resolution.  I think I'm doing the EverQuest community a favor by making all you slow-as-molasses people realize it's time to save up that extra bit of scratch, get off your lazy rear and get a new goddamn connection.  Ah, nothing like some Sunday morning bitching and moaning to make me feel better.  And by the way, anytime you feel that our site is too slow, just take a quick jaunt over to FoH's site, noows or whatever.  For the love of god, I think they're running that site on a Commdore 64 with a 14.4 connection.  I once tried to post over there but it took me two hours to register so I gave up.  Must be all the phat graphics and screenshots that slow that site down. . .

Wow, if I haven't managed to piss you off by now, what's wrong with you?  Let's talk about the main problem, instead of me randomly bashing suck-ass modem users and instead of my uneeded troll at our good friends over at FoH. . .Ok, I'm willing to admit it:  The problem is me.  I basically have no phat HTML skeeelz. . . .in fact, I basically have no HTML skeeelz period.  I use some free program I downloaded to do my updates.  I don't look at the code ever -- I am in constant, Retard-Design Mode.  The other day I accidently deleted the Insert Image button.  I sat there for something like 30 minutes trying to find where the button went.  Briefly, I considered never including another image on the site again.  But being the l33t hax0r I am, I finally managed to figure things out.  Have no fear in your LoS newswriter, but please, do have patience. . .("patients").

Ok, time for Tigole the Silent to live up to his name. . .here's some dead shit: 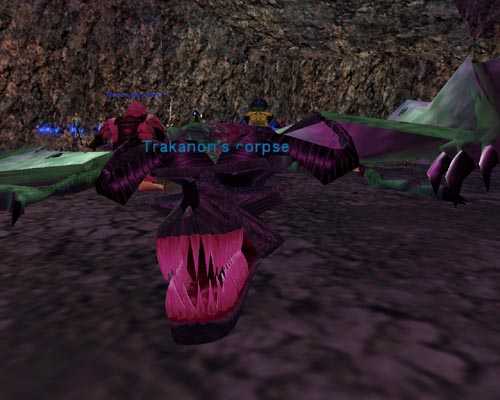 We killed Trakanon yesterday afternoon.  Was weird, I think Trak had gained a few levels.  He must have been grinding exp or something over the past week.  Anyway, he went down fast and dropped some decent loot (if you're the LoS bank account that is).  Parv's roomate ninja looted a Singing Steel breastplate before going LD and the other drop was a Mrylokar Breastplate.  Grats bank!  and Grats Bank!  Contact Polonious if you wanna offer us a phat trade for either of these items (no your Fungal Tunic doesn't count as a phat trade).