Ah the Holidays. . .All I can say is get me a bottle of something strong, lock the front door tight and pray for Tuesday.  In case you can't tell I've been finishing my Holiday shopping.  Didn't someone say this is supposed to be the season of joy?  Obviously whatever fool came up with that cockeyed notion never made it to the mall in December.

So Veeshan's Peak was on the schedule.  We start gathering on the roof, getting ready for some dragon whoop-ass.  Slowly it becomes clear that we're not going to have enough people to make an effective run.  Too many people gone for the holidays.  To combat some of the boredom and dissapointment of a cancelled VP trip, we decided to whack that fool dragon, Talendor, just because. . . 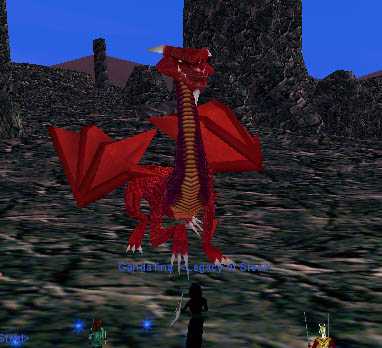 To give you an idea how low our numbers were, we only had four people survive the fight.  And two of them were bards.  (No, of course Tork didn't live -- who are you kidding?).  This is the part of the update where we all ooooooh and aaaaaah at the loot.  Only I sort of fugged up.  I died so I went to get some Chinese food while waiting on my res.  I'm sure we got something.  And I'm sure it went to someone very deserving. . .but that's about the most I can do for ya.

Well, before Veeshan's Peak I went with some people to Dragon Necropolis.  We were having a good time.  Mostly we were just trying to get some exp and the occasional decent drop.  We weren't after anything in particular, just fun.  Nizzarr picks up a named mob on track.  So we head towards it.  Turns out the mob is holding what looks like a Knuckleduster.  Everyone immediately starts thinking Willsapper.  We decide to pull the rat, even though he conned red to a 60, and see if we could keeeel he.  He was a poosae.  Galiaan, a ranger mind you, was tanking.  The mob procs slow -- Willsapper!  The mob is piercing -- Willsapper!  The mob is at a sliver.  Boom, he gates.  Next thing we know we are getting raped prison-style by every rat in the dungeon.  Anyone who has fought and been whiped out in Necropolis knows what a project CR can be.  CR takes up right until our Veeshan's Peak trip.  Big rush to get there only to have it cancelled.

After Talendor, I asked around to see who wanted to go back and try to get to the rat-bastard rat.  This time we take two groups.  Unfortunately, we had an accidental pull of the mob with the Willsapper, got him way too early as we were unprepared.  We whoop him but once again get bent over by his rodent buddies.  I get ressed in-fight and hide.  Polo checks the loot and it's a Willsapper.  All I can say is my guildmates kick-ass.  They went through hours of CR so I can now proudly call this bad-boy my new weap: 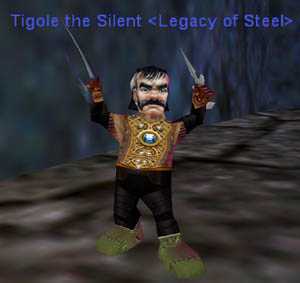 Two groups took a major sacrifice for me and I wont forget that.  I like to think that's the reason behind our success as a guild: Loyalty to one another and a spirit that never quits.  Well, that and tons of HGS.

Another highlight of the Necropolis trip was our encounter with Jaled Dar's Shade: 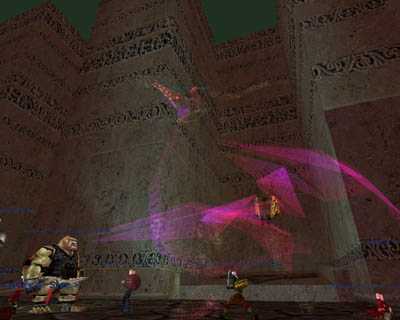 I'll wake the sleeper with a phat knife to the back.

One last thing. . .got two of these nice cloaks for all you AC sluts out there:

Stalkers, Wanna-Be's and Unoriginal Bastards of the Day: