Question: What do you do if your Merry Band of Whoopass has a bunch of MIA clerics over the Holiday season? 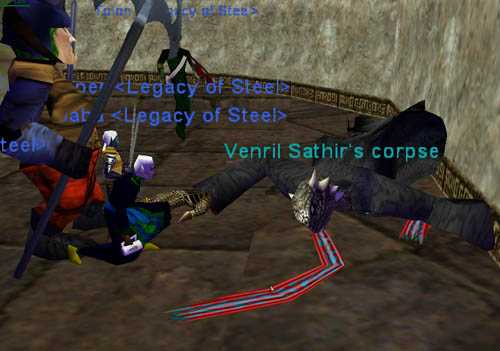 I'm not sure what everyone's up to but I keep expecting tumble weeds to blow through whatever zone I am in.  Looking forward to everyone returning from their holiday travels so that some real beat down can take place.  We still owe a few giants a piece of what-for, an LoS style vendetta.  Some Dorfs come to mind to that are just begging to be spanked (sigh, not Desp. . .Nameless isn't PvP or we'd be all over that).  So to quench some our thirst for keeeling tonight we threw together a quick Venril raid.  Was fun, we dropped him with 17. . .only 3 wizards. . .no deaths of course.  Drops were extremely good. . .if you're the LoS bank that is.  Elder Spiratualists Greaves and a Necro Staff.  Polo will be hawking those greaves in an EC tunnel near you. . .start farming some phat trade lewts Druids.

Hope everyone had a nice Holiday.  Mine was excellent although I am excited for the return of my guildmates and welcome the end of this Fa La La business.  I'm guessing we won't be back to full speed until after the New Year.  Speaking of New Year's. . .I might miss my New Year's Eve party because I can't find a goddamn kennel for the dog for the night.  The real problem is those assholes -- the Tournament of Roses.  Those rat-bastards throw a big-ass parade three blocks from where I live every year.  Getting in and out of Pasadena on New Years is like trying to escape from Alcatraz.  So if I go to this party, the dog needs to be looked after. . . SIGH. . .does anyone actually watch the parade anyway?  I mean, it's kind of disturbing if you think they just load a bunch of dead foliage on a truck and millions of people line the streets to look at the garbage.  Go Away Parade.  Ah there was a point to all this.  If you see me online on New Year's Eve, I am in a shitty mood -- don't talk to me cause I am stuck sitting behind a computer while all my friends are celebrating as my dog lies un-kenneled at my feet because the goddamn Tournament of Roses runs their mo faka parade three blocks from my front door and every shlepper in America has to show up to watch the dying flowers inch down Colorado Boulevard at 5 miles per hour.

Did I mention I cannot wait for this season to be over?

Gnome Anecdote of the Day:

Stalkers, Wanna-be's and Unoriginal Bastards of the Day: