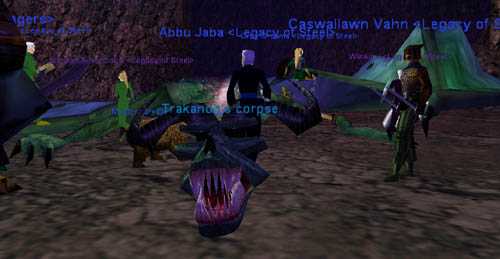 Down into Old Sebilis we went. . .another dragon to be slayed.  We're still entering the Donal's Breastplate Lotto every chance we get (nerf be damned) but we're having about as much success as a man trying to get a date with a professional female golfer.  Today's Trak run was not fun and I blame myself.  Last time I was the guy who went and agro'd the dragon not once, but twice before the charge.  If there's anything the guild loves, it's when I agro the dragon and they all get to sit an extra 30 minutes, cursing fool-rogue under their breath.  Unfortunately everything went smooth as silk and we only got to spend minimal time in everyone's favorite dungeon, Guk Senior.  Trakanon dropped two manna robes which were awarded to Medicd and Necrath.  Another notable thing about this Trakanon raid was that we figured out, finally, how to kill the dragon without having a single bard die.

We also found time to whack a fair number of Epic Quest mobs as well as a host of giants.  Random phat lewts of the day include two 20/30 bows for our rangers, a Fungal Staff for Mudcrush, a nice new cloak for Brionca, and a Torn Silk Robe for Llod's SoV armor quest.

Stalkers, Wanna-Be's, and Unoriginal Bastards of the Day: