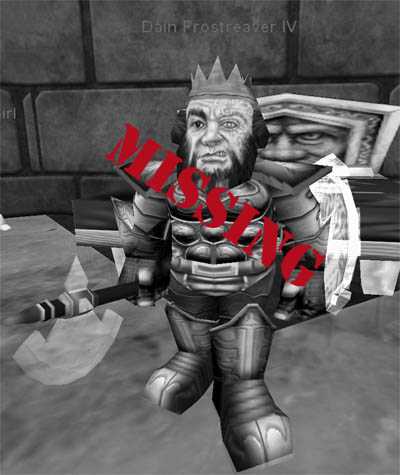 Icewell Keep:  Legacy of Steel amasses it's forces.  The Dain is pulled.  He comes solo.  The concentrated beatdown begins.  He's down to about 85%.  Only casualties up until that point were a ranger and a level 45 Rogue (Grats Danuvin).  Everything is going according to plan.  What happens?  Dain Pillowbiter IV of Shithole Keep poofs on us.  AGAIN.  We get nailed with the faction hit and everything.  Yet no Dain.  I could go on with my major rant about poor customer service, buggy programming, and lack of playtesting.  Frankly, I am too pissed to even bother.  But I will do this.  I'd like to extend a special thanks to the GM who came to watch yesterday yet did nothing.  Hope it was a good show.  It's even better watching us fight the whole battle. . . should try letting us sometime.