Yesterday was Quest Mob Day.  Or at least it was supposed to be.  We got off to a good start.  Chon is nearing the end of his Ragebringer quest so we got to wax General Viagra in Kithicor as part of the fun. 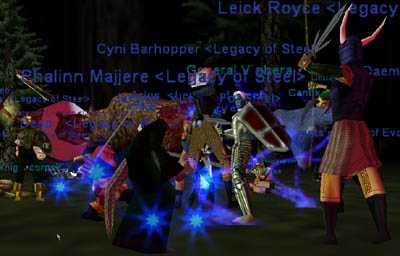 General dropped one of these for Sexy Joboba

After the General died, the plan was to head to Dreadlands and kill Gorenaire.  Tork still needs a white scale to complete his SSS quest.  We port right from Kith to DL, head to our buff spot.  Everyone is grouped and buffing.  Suddenly, YOU HAVE BEEN DISCONNECTED.  Apparently the whole zone came down.  When I was finally able to log back in, I was back at the wizard port in my regular armor (not the resist gear I had on at the buff spot).  We send people out to track Gorenaire right away.  Of course he's not up with a zone repop.  I am beginning to think we are capable of poofing any mob in the game.  I like the idea of these outdoor dragons you can go beatdown on at your leisure.  But why in god's name would they put one in Dreadlands?  There were 100+ people in the zone last night.  It's a major port zone. . .people hunt there for exp.  Why not stick the freakin dragon in Swamp of No Hope where virtually no one ever hunts?  Well, that ranting aside. . .I petitioned the GM at this point to see if there was any hope to get the dragon spawned.  A guide responded that the GM was on his lunch break and would get back to me soon. . .

Sooooooo with a whole gang of people ready to keeel, we had to come up with something fast.  Trak was dead.  Venril was dead.  The Dain was poofed.  Velketor was dead.  Yelinak was not up.  Zlandicar was not up.  Gorenaire was MIA.  Chardok. . .well Chardok sucks.  So to Emerald Jungle we went. . .off to keeel the leezurd. 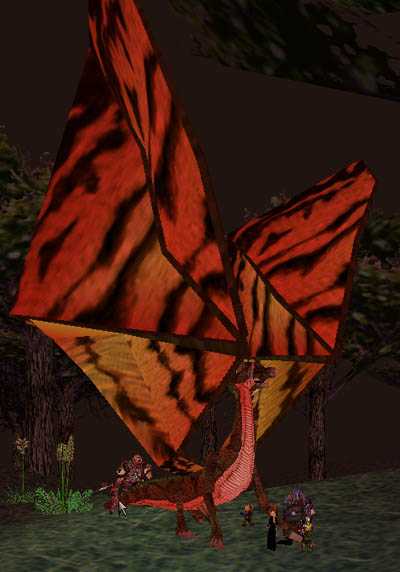 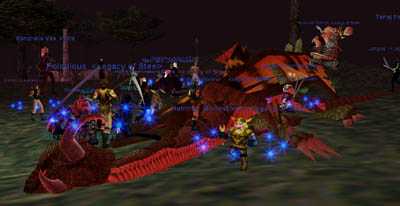 Loot was some crap we don't need. 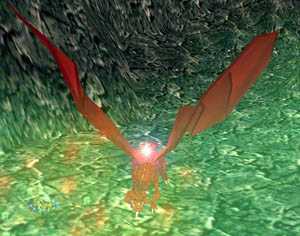 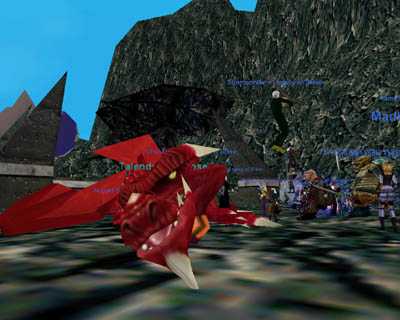 Talendor actually dropped some good stuff.  A Dragon Hero Bracer went to Cyni and a Torbin's Eyepatch went to the Wizard of Ozus.

At this point the GM gets back to me, "How can I help you."  I explain the situation. . .40 people sitting buffed for a dragon. . .getting ready to pull in the next 5 minutes. . .zone comes down. . .blah blah blah. . .can you please spawn the dragon for us?  GM tells Tigole, "No."  Now I realize that it might go beyond the GM's abilities to make a mob spawn. . .especially a mob like Gorenaire that's on a spawn timer.  But I ask anyway, "Out of curiosity, why can't you?"  No response. . .

So that was yesterday.  We also killed that ape in Field of Bone for Phalinn's snake quest.

By the way, all you random stalker-cacksuggers who bugged me about updating the page the past two days. . .I clearly said in the last update there would be no freakin update.  Well, just to fill everyone in on what I might have missed we checked out Veeshan's Temple for the first time.

What did we get out of our trip to Veeshan's Temple? 13pp and some knowledge of what NOT to do.  We also got rather owned by a nasty faction bug.  We are all warmly to the CoV mobs in the Temple.  But if you get ressed near them, there is a chance your faction doesn't "register" quick enough and you get killed.  Luckily, GM Valdelmar showed up to check things out.  It was good to know that someone from Verant was there to witness a bug-in-action and hopefully help to get it corrected.  I keep telling you all, Legacy of Steel is a walking Quality Assurance department for Verant if they wanted it. . .follow us around for a week. . .we'll show ya what's up. =P

Random Pic of the Day: 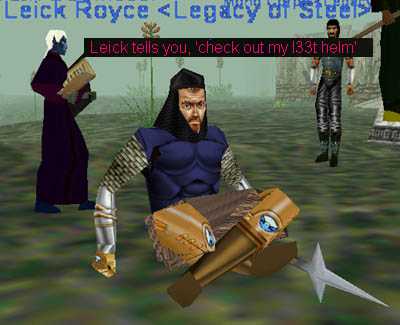