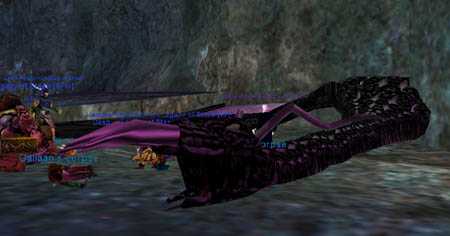 I stumbled through yesterday in a hungover haze.  My major accomplishment of the morning was drinking a glass of water.  A day of sleeping on the couch and feeling more useless than usual was sounding pretty good at that point.  Maybe eating a cracker some time in the day.  But then I remembered the calendar!  Dammit Zlandicar needed to die.  I am so gung ho. . .doesn't it just kill you?  So we rallied everyone and went to slay this ugly mo faka.  I can see this being a mob that causes many problems down the road.  Seems like people go LD like mad while fighting Zland.  Top that off with the LD/Fear bug that leaves people unable to log back after getting disconnected and you can see why this could be a real problem.  Anyhow, the bitch is dead.  Only got one new loot item that we haven't seen yet.  Check it out: 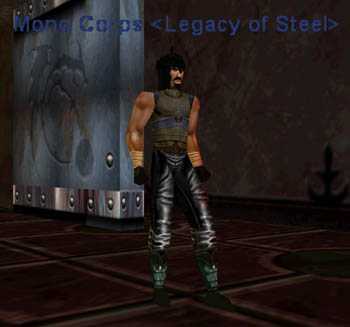 So far Monq is doing a great job at looking like the biggest freak possible.  Other loot consisted of the 24/30 Pal/SK one hand slasher, Zladicar's Heart (grats Winkin), Frakadar's Talisman (grats Ozus), and Zlandicar's Talisman which I ninja-looted and promptly turned into a Sleeper's Tomb key:

Reasons of the Day to Say, "F Verant"

--We killed 3 Queens in Chardok on Saturday, she dropped 0 blades.  That now puts us at 5 Queens in a row with no blades.

And lastly, I couldn't resist:

"Mastery is not something that strikes in an instant, like a thunderbolt, but a gathering power that moves steadily through time, like weather."

(apologies for the total lack of profanity, homosexual references or any mention of the word "testicles" in today's quote of the day)