I figured if John Travolta's career could do it, so could I.  That's right -- come back.  The truth is, I heard melee can now bind in Field of Bone and I almost blinded myself by the massive erection shooting through my trousers at the very thought.  How could I resist not coming back?  Well, all sarcasm aside, I am playing Everquest again.  I appreciated all the kind things people said when I left.  I also enjoyed the speculation over why I left (nerfs etc.).  Truth is, I was massively burned out.  As much as I love this game, leading a guild is a ton of work.  Luckily we have a new leader now, Oogtuug. Oogtuug is the famous Draed Vahn, the original GM of LoS, our founder.  The best part about Oogtuug taking over is now I can bitch and moan everytime I don't get loot.  I also plan on bitching and moaning any time he schedules an event that takes place in a zone where I don't need loot.  I think I'll bitch and moan if I have to wait around too long for something too.  If we lose to some mob, it will of course be Oogtuug's fault.  Mostly, now that I am not GM, I have to dedicate most of my time to figuring out how to best bitch and moan to Oogtuug.

So I gotta say, leaving Everquest was entirely overrated.  It was nice.  I *was* spending a bit too much time playing.  But I quickly realized how insanely boring my life was.  You know, when you're done with your daily responsibilities. . .it's late at night, no one to go out with etc. . .that's the best time for EQ.  What did I do instead?  Well shit.  First there was TV.  I swear to god I don't know how people watch television.  I read EQ message boards and I hear people flame hardcore gamers for having high /played times.  Wonder what people's /watched would look like if TV had that feature.  Jesus, television isn't suited for retarded chimps.  It's so bad.  "Oh my god, Survivor was so good this week, some dumb numbnuts breathed in smoke and passed out in the fire!"  Puh-lease.

After giving up on TV, I tried to fill that nighttime void with another computer game.  The one I always liked most, before EQ at least, was Counterstrike.  Counterstrike is a great game but I must say, EQ spoiled me a bit.  Granted, our guildchat is not exactly what I'd call intelectually elite. . .it does at least go beyond the limits of what Counterstrike can provide, which apparently is, "Fag. Camper. Laaaag. Fuck You."  Those four phrases are all you need for a lifetime of happy fragging.

I missed my friends.  I really don't care what we're doing, I just missed the group of people I got to know online.  You can criticize computer games for being anti-social all you want, but it beats sitting around watching 10 dirty, greedy, retards eat a chicken in the Australian Outback.

Enough of my rambling.  I am supposed to be sharing with you all Uber l33t l3wtz and stuff, right?  Well, sheeit.  Problem is our roster has been hurting lately.  We lost a lot of good friends the past few weeks.  So we've been taking it easy.  About 14 of us went to check out the new portion of Hate tonight.  Hate was always one of my favorite zones.  Apparently, a breastplate drops off of nearly everyone of those lower mobs these days. . .hehe.  We spend our time up top though.  Killing the new stuff.  Drops were fairly scarce up there but there were some neat sites. 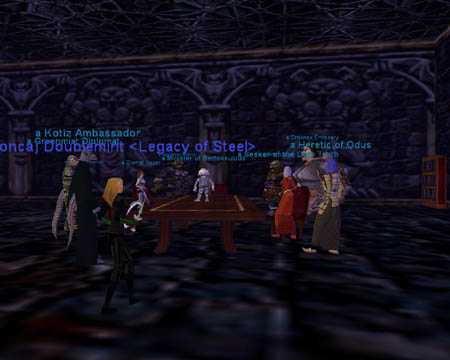 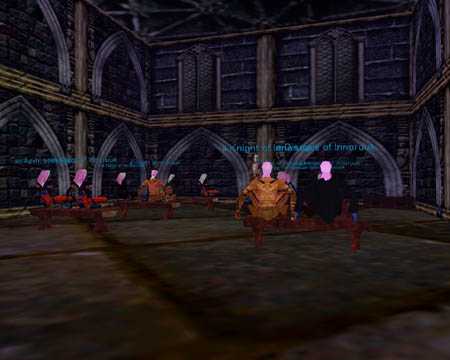 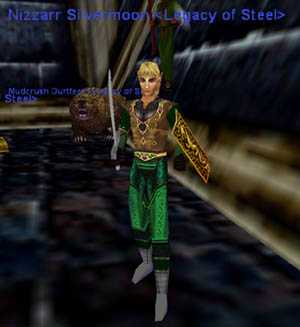 After donning these geaves, Nizzarr had the sudden urge to redecorate the house and watch Judy Garland movies.

Like I said, we don't really have the numbers to kill much right now.  Luckily, lots of people took a break and are now returning, refreshed and ready for uber-leetness once again.  I wish I had dead Inny pictures or new Inny loot to post for ya, but well, I don't. . .and I wont. . .at least for a few days :p  BTW, should be interesting in the new Planes now.  Inny and CT are no more Poosae-Freebie-Mo Faka's. . .Luckily, for the pick-up raid crews, the old god loot drops all over the place, is cake to get and the other armor drops are more frequent than ever.  You foolmans have it easy.  We camped Hate and Fear for ages, stuck at level 50, for armor that hardly ever dropped.  We also walked to school uphill in the snow.  Both ways.

So what do you do when you feel the need for an Epic Battle yet your roster is anything but epic?  Take 4 of your good friends and go on a Priest of Discord hunting spree.  Worked for us the other night: 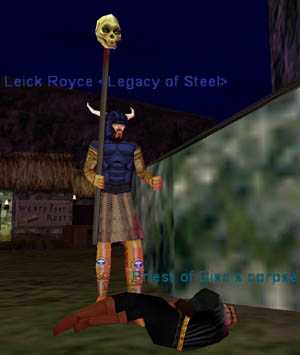 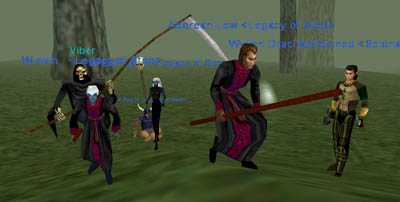 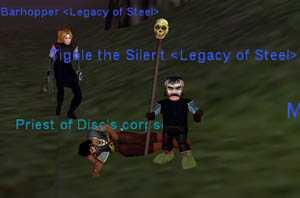 Best thing is, that mo faka PoD spawns again in like 6 minutes. . .

What? Don't give me that look.  You kill most the shit there is to kill, stay at 60 for months on end and tell me what ways you find to not get bored. . .

Because you expect us to.  And because you treat us like we are. . .