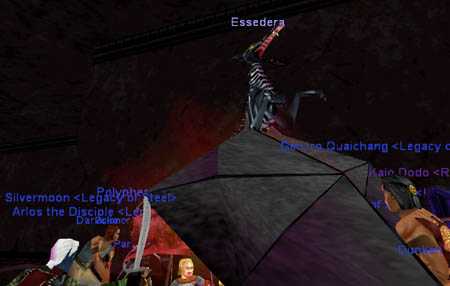 Really fun night in Temple of Veeshan.  We moved through the Halls of Testicles with ease.  We did not attempt Dozekar, so I guess saying the Halls were cleared is a bit of bad information.  Drops were so-so.  Of course all the named drakes dropped quest shit that will only become relavent once Dozekar the Cacksugger dies.  Other drops included some plate helms, gloves, chain gloves, silk gloves, leather boots, leather gloves.  Really not a lot of armor drops considering the number of mobs that were killed, but o-fuggin-well.  They're gonna be raiding ToV again tomorrow night so perhaps they'll have better luck with Legs and BP's.  Unfortunately, yours truly won't be there. . .but I should be back Saturday or Sunday with an Update.

So anyway, we kill the first two Wurms in the Testicle Halls, and we're killing the next mobs down below when my doorbell rings.  I'm thinking to myself, "I didn't order no chinese food. . .don't answer that. . .nothing but trouble."  Sure enough, it's my next door neighbor standing there.  "I need to ask you a big favor," she pleads.  "My rabbit. . .well, see my husband is out of town and. . .there's blood. . .I need someone to come look."  At this point I'm thinking to myself, what the fuck is this chick talking about.  So I go over to her apartment and sure enough there's this fucking rabbit hopping around.  "I need you to look at her or hold her while I check her.  I need to see if she's bleeding," she tells me.  I look at Bunny Fucking Foo Foo on the ground and tell her, "She looks pretty much ok to me. . ." and head for the door.  My neighbor responds, " No Wait!  That's not her.  That's Floppy. . .that's the male.  Emma is outisde."  So she drags me on to the terrace and there is this black little ball of fur in a crate and all over the floor is some ORANGE *stuff*.  So she makes me pick up this fucking bunny as she checks it for blood.  The whole time I am thinking, what a useless fucking pet. . .fucking rabbits.  I felt like saying, "Listen sweetheart, here's twenty bucks. . .throw that fucking furry mess into the trash and go buy yourself a new one."  Well, it comes to down to this.  Apparently the orange *stuff* was not blood.  Which is good and bad news.  Because the options you're left with when you got an orange-stained bunny and it ain't bleeding aren't exactly rosey.  So I'm trying to get the hell out of there.  I mean, I was on a 20 minute AFK at that point. . .I wasn't dealing with a life or death emergency, but some stupid fucking bunny.  Next thing I know, she hands me the phone.  I'm talking to some Vet.  My neighbor wants me to give the exact description of the scene in case she missed something.  The whole scene was just too weird. . .What does this have to do with EQ?  Well nothing.  But next time you're pissed off at that guy in your group for going AFK for 20 minutes, stop and think, "Maybe his neighbor's bunny is bleeding to death. . ." or better yet, don't.

Turned on by my l33t use of Neb's Warbone, Darvulia could not resist sending me *hot* cyber tells.