The God of Fear is Keepin it Real with the Notorious B.I.G. 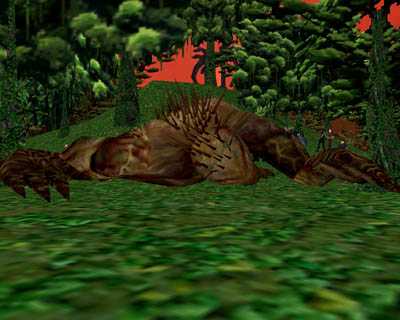 Patch day madness.  Seems like we can get the most bang for our buck in Fear these days, at least when the servers pop.  So to Fear we go.  After a couple hours of constant trains (a.k.a. "pulling") we finally get a shot at the big guy alone.  I won the Gimp-of-the-Day award yesterday.  In all the organizing and prep I was doing for the raid, I forgot to put the ol' Willsapper in my bag.  Of course in my first 3 combat rounds, I had three proc's and one very angry god on me.  When I finally finished loading, all I saw was Ronald laughing at me.  It was a very quick, very stupid death. Sigh.

As far as lewtz go, CT dropped the Choker and the Cloak, again.  CT is becoming a deja vu kind of encounter.  Not that we mind.  Please CT, drop 20 more Chokers.  Thx~  Anyway, yesterdays lewtz went to Rhap and Leick.

Draco dropped some nice stuff too.  The Zombie bracer went to Necrath.  And Riell was awarded the ownage belt, the first we've seen on one of our raids:

God damn, Draco is a freakin joke.  Once again the majority of us took ZERO damage.  I still boggle how a belt this nice drops off a poosae mo faka like ol' dragon bones.

That's about it.  The night before we were in Temple of Veeshan, the Notorious T.O.V., playing around with our friend Dozekar the Cacksugger.  We also did some clearing of the halls after.  We only got 3 drops the whole night and all 3 drops were off of one mob.  Kind of odd.  But who am I to question "The Vision"?  We're not doing much today because lots of our members are participating in the guildwar that some folks on The Nameless organized.