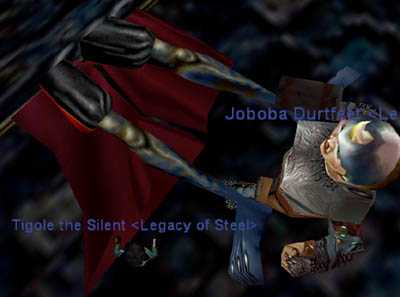 Inny Goes on that Long Strange Trip with Jerry Garcia

We didn't really have anything planned for Saturday.  Lots of our members were engaged in the guildwar Tenaj organized.  Apparently, everyone was having a blast.  The rest of us were just sort of dicking around, doing exp, quests etc.  After awhile we got bored and decided to kill something.  Inny was up.  We didn't really have enough to kill Inny.  But we went up to Hate anyway.  People pulled in friends from their exp groups.  We were a rag-tag bunch.  I must say, it turned out to be one of the funnest fights in a while.  In the age of the gimp-rush (thanks server-side filtering), there is still no greater feeling than taking down a mob with less than substantial numbers.  So only one new item that LoS has not seen yet.  This bracer:

The bracer went to Nizzarr.  Other drops included a Dorf Cloak that went to the bearded lady, Kineku.  Ogre earring for the lovely Joboba.  Eye of Inny that will help Yvin complete his epic one day.  And I looted the Leatherfoot Sandals.

I started a thread on the Safehouse about these sandals.  The whole balance of Everquest as we know it lies in peril over a GREAT mistake made with this item.  When worn, the sandals look like leather boots.  This is no good.  Let us Halflings show off our sexy, furry feet.  We want NO graphic on these sandals.  For the love of the Vale, Verant, correct this horrible mistake.  It's a priority as I see it.

Ok, I could ramble more but I am slightly hungover and am going on 4 hours of sleep so fuck it.