The Dain is Dead 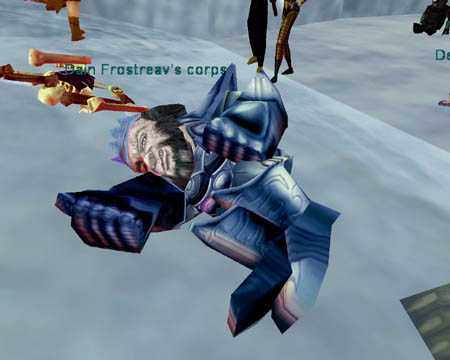 Dain Cacksugger the IV, the resident poofer of Icewell keep, met his maker tonight.  Now, many of you long time visitors to the site are probably wondering, what took you guys so long to kill that dorf mo faka?  Well, early on when SoV came out we had the Dain *poof* on us 5 times.  Eventually, we got so deep into our faction (pro-dragon) that the Dain became a low priority.  Recently we had a discussion about this little fool dorf and decided that he should die if for no other reason because he is a DORF.  And because he is there.

The fight was a freakin blast.  A few guilds on The Nameless took some shots at Dain Fleshbeater earlier in the week and sent me tells saying that it was the "poosae" Dain.  Well, it wasn't.  The little King of the Desps was hitting for 425's.  Anyway, pulling him is always interesting to say the least.  Was nice to have him not poof.  I forgot to take many screenshots during the battle because I was busy doing other stuff (mostly stabbing the fuck outta Dorfman).  But I did snap this one pic. . .not much to look at, but something nonetheless: 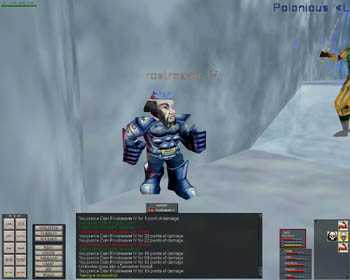 Here's what could be found on that foul, stout, stinking carcass of the Dain:

Lucky for us, being a guild of giant fuckeruppers, it will be quite sometime before you'll see a Dorf belt on one of us.  I'd be willing to bet any time you see Ronald in the next few weeks, he'll be in Icewell.  Congrats to Saldor on the Crown and Dinamas on the Ring.

Continuing with a new feature that I added to Legacyofsteel.net last week, I now present you with this week's installment of. . . .

Welcome to the Wonderful World of My Tells 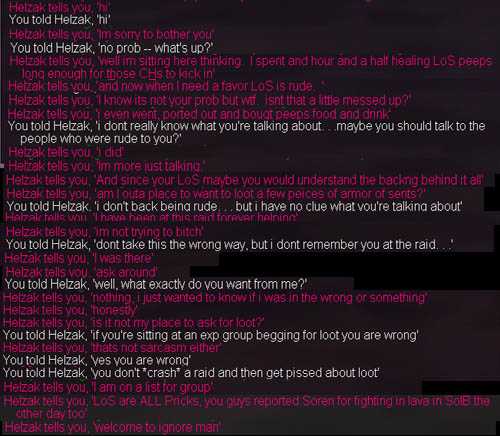 By the way, if anyone knows Helzak, please tell him I am absolutely heartbroken that I was put on ignore.  All those tells I send to Helzak, falling on deaf ears. . .sigh