I've decided to retire the idea of insulting dead celebrities.  It was fun for a little while but after getting 20 tells a day from random peeps with their lines for the site that just HAD to be tomorrow's headlines, well, I said fuck that.  Enough.  So no Joey Ramone disrespect coming from me today.  Just pictures of some dead dragons.

So we started fooling around in Sleeper's Tomb the last few nights.  The first night was truly a blast.  7 of us were killing stuff in the first few rooms.  Of course the only drops of the night were 5 copies of Wave of Healing.  Here's a pic of LoS's debut in ST: 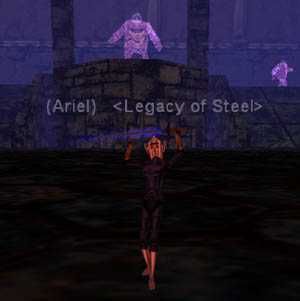 Hopefully we'll get some more keys soon and give that place the beat down it deserves.

Enough for tonight.  I am exhausted.  By the way, Lezbianseahorse doesn't qualify as a Stalker, Unoriginal Bastard or a Wanna-be.  You are just a freak.