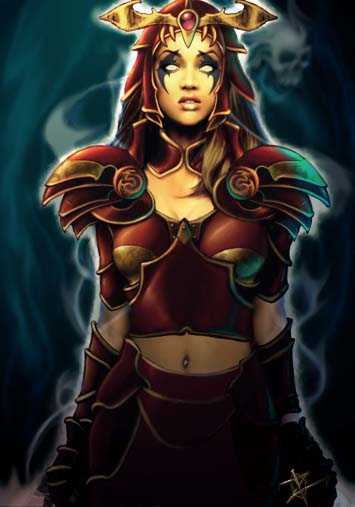 Can you say mad skeelz?  Check out the picture Thatia made of her Shadowknight.  Of course, Thatia's real name is not actually Thatia but I have no idea if she'd object to me posting her real name.  Anyway the real life Thatia is an amazing artist.  Make sure to NOT bug her to make a picture of your character.  Well, she might, but only for plenty of HLS.  After all, Thatia is related to Thorax, the Beloved Queen of HLS.

In other news, we went to the Plane of Patch today to farm the phat l3wts.  Here's the obligatory shot of CT, lying dead as usual: 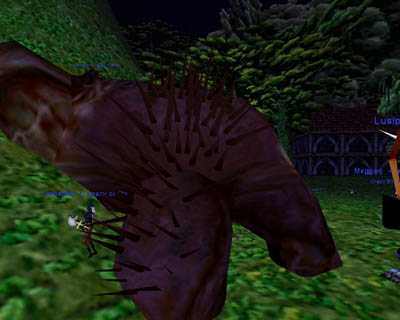 CT dropped a Bile Choker which was awarded to extreme ninja-looter and all around sexy halfling, me.  It was an amazing surprise and I'm still mopping the jiz off my monitor.  Well, mostly because I was cybering with Tenaj but also because the Choker rocks.  CT dropped some phat caster l3wtz too.  Check out what Necrath now wears:

We actually got two dracos thanks to the emergency patch.  The second one dropped one of these, which now belongs to the Wizard of Ozus:

So I have some good news and some bad news.  The bad news is I wont be around tomorrow, so no update unless my homeboys take some screenshots and post 'em.  We have some fun stuff planned too.  The good news is I'll be watching the Kings and the Redwings.  Playoff hockey is the next best thing to sex.  Well, actually, oral sex is probably the next best thing to sex.  But Playoff Hockey is a close second.

Oh by the way, regarding the patch. . .I'd like to thank all my fellow Halflings who participated in the Protest Thread on the Safehouse regarding the Leatherfoot Sandals.  Who says one Halfling can't start a revolution?  Viva La Fur.