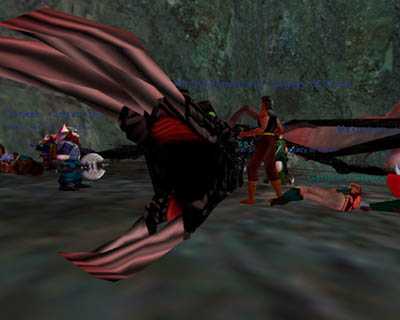 Just a quick lunchtime update today.  I'm fuggin sick with a cold.  It's one thing to be sick in the middle of winter but it really blows when it's it 80 degrees outside and I'm sittiing here with 4 tickets to tonight's Kings game.  Well, now that' I've gotten my daily bitching and moaning out of the way I should mention we killed some leezurds yesterday.  Zland dropped a whole bunch of shit, most notable a First Brood Talisman which went to Adorean.  Genjiro now has a Sleeper's Key, or at least will as soon as he turns his Talisman in.  Barny looted the Frakadar Talisman.  Llod was given the heart.

I'm not sure what Klandicar dropped honestly.  Right after the kill, my computer died on me, just totally froze up.  I finally got back on and was naked at my bind point.  Anyway, apparently Polyphemus was awarded the Talisman to make a Sleeper's Key with.

So now we have 15 to throw at the Progenitor or whatever the fuck that giant mo faka's golem name is.  At least there's always the MotG.  With the current stability of the servers it looks like the MotG is a daily spawn.

Had a bunch of stalkers yesterday but my computer kept locking up so I didn't want to deal with screenshots just to give some freakish moron 5 seconds of glory by seeing their wanna-be posted on the site.  Ok, I'm going to sleep now.  I feel like hell.