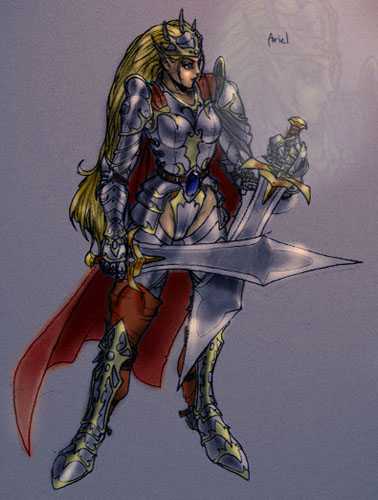 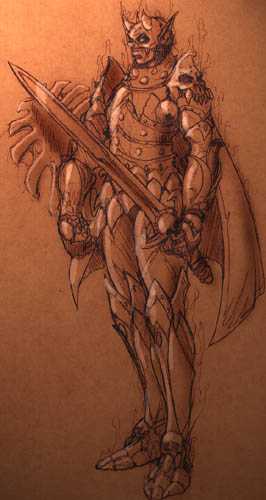 The top picture is of our very own Ariel and the bottom one is of Troi.  We all know that the real Ariel would definitely wear a plate helm though.  Thatia's talent is pretty unbelievable, even if both these pictures lack the "Suck Me Beautiful" face of the original Thatia self-portrait.

In other news, we've been killing shit.  Lots of shit.  Here's an example: 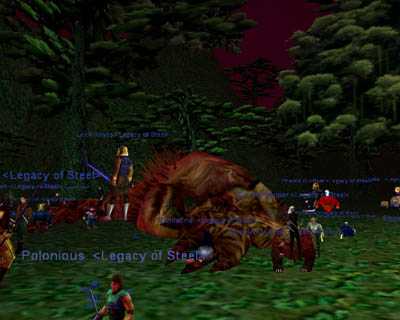 So the server came down today which meant time for some CT farming.  For all you CT-slayers out there, you will be able to appreciate this.  What did the large pile of fecal matter drop?  Choker and Cloak?? Why no!!  This is what you want to see when you ninja-loot the big guy:

That's right, TWO robes and a halo.  The halo is new to The Nameless so I feel obligated to post the stats or else suffer the wrath of the loot nazis in the general forum:

Congrats to Meggan on the Halo.  I am still pissed that it wasn't awarded to Megganystar, my level 1 cleric.  I think it was supposed to go to her and Meggan just ninja'd the thing right out from under me.  That is what we refer to on The Nameless as very wuwu~  Congrats are in order for Phalinn and Daelomin as well on the Robes.

Well, it's time to address all you cacksuggers who have been bugging me to update the site.  Truth is I have been too fuggin tired to do it the past few nights.  The weather finally turns nice here and my air conditioner breaks.  It blows hot air (kind of like Jangos).  Have we been killing shit?  Hell yes, of course we have.  After VP on Friday we proceeded to kill Draco before bed.  The next day we spent questing. . .and oh what a day it was.  I'll just leave it at that rather than suffer the accusations of causing a nerf that's already in progress.  We also have been raking in the Temple of Veeshan loot recently.  We farmed the Halls so hard there are cows and chickens wandering around there now.  We've become so accustomed to "Leather Nights" in ToV that we were shocked and overcome with joy when we stumbled in for "Plate Night" this week.  I think since sunday we've gotten 2 Plate bps, 4 plate legs, and 2 robes from ToV. . .not to mention the Robe of the Azure Sky we picked up Friday and the two CT Robes tonight.  Robes are good, yes?

Anyway, don't expect an update tomorrow.  While the guild is off unleashing the Wrath of Whoopass on Norrath, I'll be in downtown L.A. watching the Kings and Colorado.  God I love the playoffs.  Maybe if one of my guildmates remembers that the "-" key is standard on all keyboards, I might just have something to post for you after I get back from the game tomorrow.