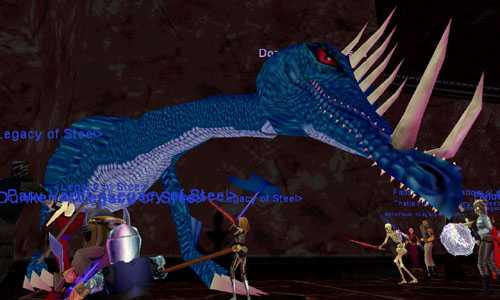 Back to reality for me and back to business.  But for the guild it was business as usual. Was a fun night.  First stop was Icewell Keep to lay waste to Dain Cacksugger the IV.  He was the 425 Dorf tonight, again.  The fuggin noobs that plague Icewell are really getting old though.  We had two gimps trying to loot the Dain tonight.  Times like that I wish The Nameless was PvP.

So as you can tell from the above picture, we also ripped into Doz-e-queer the Cursed.  I posted that pic so you could spend hours analyzing our strats, only to flame us on our boards. Actually the picture is faked.  What we usually like to do with Dozekar is train him to Lendinara the Keeper then make them fight it out only to KS Lendinara at the last possible second!  We read it at the Safehouse so it we knew it MUST be true.  Well, strat aside, the important thing is ph4t l3tz right?  Now THIS is what you wanna see when you right-click on Ol' Dozey's corpse:

We DID complete some new quests tonight but I don't have any pictures for you yet.  Moca completed the Test of the Long Battle Tonight.  Resulted in some boots -- AC 25 +10 Wis Sta +50 Mana +3 all saves Effect: Aura of Battle -- Wis caster only.

Also, next time I update this page I'll post the results of the FOUR tear quest too -- the Request of the Strong.  Leick's currently got all the tears for it sitting in his inventory, logged out in ToV.  Of course the goal is to complete all of these ToV quests but with Doze on a one week spawn (not to mention the named drakes) it's gonna take us some time.