Frozen Moses to be Nerfed!!! 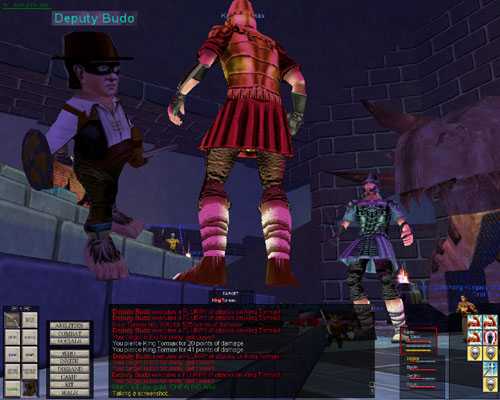 Things are looking grim for LoS, folks.  We were doing a standard Tormax run and got caught using our "secret weapon" by some hidden GMs.  As you can see we had Tormax down to about 25% when all of the sudden we released the Sleeper, Veeshan and Mooto in Kael.  Mooto, apparently an enchanter now, charmed the Sleeper and was raping Veeshan three times till Tuesday until the GM's brought the zone down.  At that point our guild was disbanded and all 149 of us were suspended.  Little do those stupid GM's know we have since reformed and are now known as

Of course, we have been debating our suspension and disbanding something fierce.  After all, if Verant puts something as powerful and awe-inspiring as Deputy Budo -- a.k.a The Frozen Moses -- in the game, then why the hell can't we use him?  You think it's easy getting Frozen Moses from Misty Thicket to Kael?  After posting on nearly every message board and chain-sending Verant hate emails I finally received this response:

According to Verant's rules and regulations there shall be no charming of "Frozen" biblical characters for use against uber mobs.  This includes the Fozen Jesus, Frozen Moses, Frozen Noah, Frozen Joshua, even Frozen Paco.  Ok, well, Paco might not have been in the bible but he's one wicked motherfucker we don't want you charming either.  Whether or not he's actually frozen is beside the point.  Verant employees also witnessed the following quotes in your guildchat which prove that you are in fact, the Evil Empire in need of disbanding:

"This is our best Tig-sploit yet"

"Wow, the mob just hit me.  Not used to that.  Are we gonna be fighting any more mobs that hit back?  God that would suck."

"Cyni is really a man"

As you can see, Mr. Bitties, it's obvious that you are in fact the devil.  Verant has hired a man named Pauly to track you down and bust your fucking kneecaps with a Louiseville Slugger.  We sugest you stick to Minesweeper and Solitaire and other such games we have no frozen mythical characters for your exploitation.  Thank you for your time and interest.

In other news, before the disbanding we finished the Ring War for everyone's favorite Halfling Warrior, Mr. Parv Vardt.  Congrats to Rivervale's Finest! 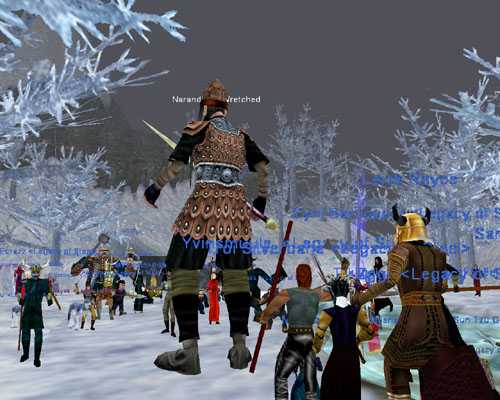 That's it for today.  Not sure when it will happen, but soon this site will move be changed to accomodate our new name,

Ok just to give some of you an idea of what my sick-o tells are like, I included these few seconds of my chat window.  If you send me a tell and don't get a response, maybe this will explain why:

AFK Message of the Day