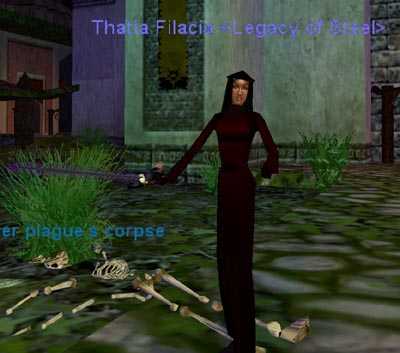 Ok you fuggers, I am updating the damned page so quit your bitching.  First things first.  Thatia finished her epic last week.  Man, this was the first epic that actually felt EPIC getting.  Basically, Thatia was going off of old information.  We spawned that mo faka in CoM with basically no preparation.  "Oh, he's poosae -- you can kill him with one group."  Well, try taking one group to kill Lhranc.  Anyway, getting everyone there in time for a second try was quite an experience.  Needless to say, there's the picture of Thatia with her epic.  Oh, and don't come bitching to me about why didn't I research the quest better -- not my damned epic, you foolmans.

Let's see.  What else died since the last update. . .oh.  Doze-slacker bit the dust and dropped some more tears.  The spawn times on the drakes is currently killing us.  Also the fact that 9 out of 10 times they seem to drop the damned Glowing Orb is also fairly fucked.  I'm calling it right now folks, Dozekar and those ToV quests are the biggest clusterfuck spawn waiting to happen. . .

But here's a pic of the big guy dead:

Killed the Dain last night too.  I don't take pictures of that slack-daddy any more.  He was the super Dain but we took him down so quick and easy calling him super is a bit of a joke.  After the Dain we decided to try to get a white scale for a bard epic.  We headed over to DL and right when we get to the buff spot some fool trains Gore on us.  Even unbuffed and ungrouped we got him to Gore.  We were kind of pissed about the jackass Tom Foolery so we quickly buffed up and pulled Gore for true.  We dropped the bastard in approximately 10 seconds with zero deaths.  I'm not sure anyone even needed a cheal.  No one in my group lost a single hit point. 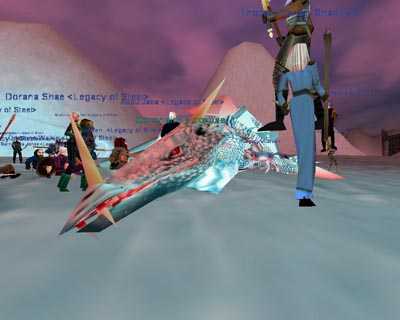 Anyway, congrats to Dorana on the scale for her Epic bard thingy.

So it's been a busy week.  I've been spending time after hours getting my 9th Coldain ring.  It's pretty fun.  Being KoS adds a certain element to the whole thing.  Of course, the quests are not terribly difficult, but very well done: