Last night was fan-fucking-tastic. We absolutely ripped through Sleepers.  Our goal was to find the elusive mob called Z-Axis. . .we needed to try Dictate on him, lifetap for slow.  We all had our Res Effects buffs in place but Z-Axis never spawned.  Instead, we decided to destroy the Warders of Sleepers Tomb.  This was our first chance actually seeing them up.  Previously we had a bunch of !placeholders to contend with.

So we kill the Final Arbitor and we were sitting around buffing up for our next fight.  Leick and I both notice that flying gargoyle that roams between the Warders so Leick tells me, "Grab it, Tig."  Being the fantastic noobie moron I am (you really need to get to know me to appreciate just what a n00b I can be) I shoot my l33t Adarra's Bow at him.  Of course, rather than the Garg turning and coming to attack me, he takes off in the other direction toward Nanzata the Warder.  Cue Dueling Banjos as the Halfling goes down.  So that's how we decided which Warder to kill first.  That prick cacksugging mo faka beeotch Nanzata had to die. 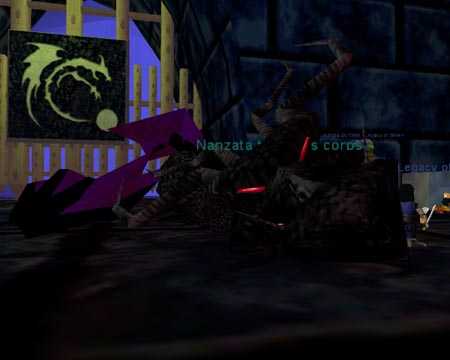 Always fun killing a mob on your first attempt. . .

The next Warder looked like Silverwing so we just knew he had to be a big phat poosae.  His name was Tukaarak or something like that.  Ol' Tupac died on the first try as well:

The last warder we took down was Hraashna.  Hraashna absolutely destroyed us on our first attempt.  We had very little knowledge as to what sort of strat to use against him.  We just kinda saw the dude and went for it.  Needless to say we learned a lot.  What happened next was pure magic.  Keep in mind we had 26 people in Sleepers.  We ressed up, came up with a kick-ass strat and beat Hraashna in what, if I dare say, might have been one of our crowning moments.  With 26 people this was not a matter of "Press A" and hope for the best.  Every single person in there was on the exact same page.  He might not be the toughest mob in EQ but with the raid force we had it was a fantastic challenge and an even greater victory.

Here's some of the stuff we picked up:

The main score was picking up 3 Primal Warswords and a Priceless Bow.  By the way, if someome from VI ever wants to log onto The Nameless and discuss what TO DO and what NOT TO DO as far as caster loot goes, I'll be happy to show you those piece of shit staves in my inventory as examples.  The mask up there isn't so bad.  In fact it's nicer than anything I wear.  But c'mon foolmans. . .what's with the Schwag Staves?  Didn't you learn your lesson with Venril Sathir? 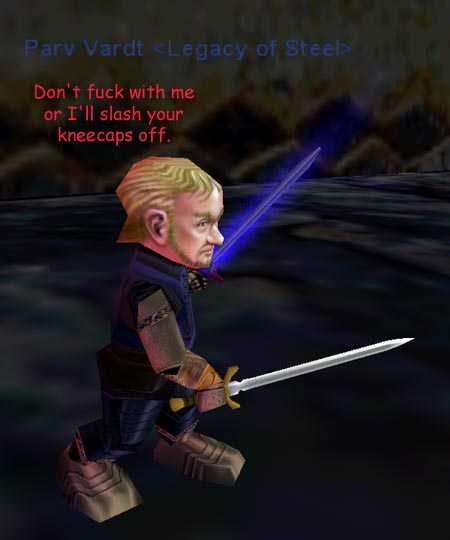 Oh yea, we also picked up two of these gems:

Cast that on your Halflings and you get yourself 3 feet of pure whoopass:

So, after all that ST I was gonna have the most ub9r version of Mort & Gage, Uber Bankers ever.  But I was bound in Freeport.  That cacksugger banker in Freeport said the usual like of "Um, I am a dumb fucking fee-ack and don't know what to do with this other than sit and spin" instead of naming the item.  So you'll all have to cheel out till I get my lazy ass back to Thurg for some banking fun.

Oh after ST 33 of us went and lost to Cazic.  I was too tired to deal.  We got him to C.  Then I bitched and moaned like a whiney schoolgirl and went to bed, leaving my guild to think of me as the cranky, whiney bitch I truly am.

That one above is good ;)  All j00 Uber Guild Leaders will be able to relate to that.