Dragons Feel the Wrath of the Evil Empire 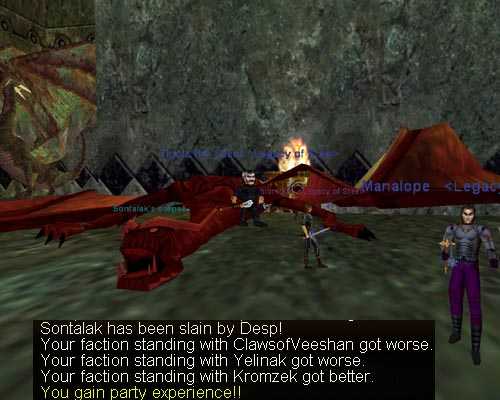 Dragon-killing was the order of the day.  So we're heading over to ToV to see what dragons we could lay our mark on when Ol' Kland pops.  What are the odds of that?  Scoring an easy ST key on a Sunday evening.  Who woulda guessed.  Next stop was the Halls of Testing where we laid Doze-slacker Version 5.0 out like clockwork.  Then we popped back out to get another key from Sontalak.  Those Sontalak fights are epic.  Of course we get a crazy lag spike when Sontalak engrages.  Too funny -- watching a dozen people die to enraged all at once.  Yes, Desp did get the killing blow but fear not, he still sucks.

To finish the night we were going to try out Lendiniara the Keeper.  We had a hell of a good time fighting her.  It was all fun and games until she gated though.  Oh well, live and learn.  She'll die another night.  I was hungry so I took off to get a burger at In N Out.  Can't be a hero 24/7. . .a man's gotta eat.

Gage was the lucky winner today!