Good, Bad. . .We're The Guild With the Kills

This is King Tormax dead.  It could be any giant for all you know.  But trust me, it's King Tormax. 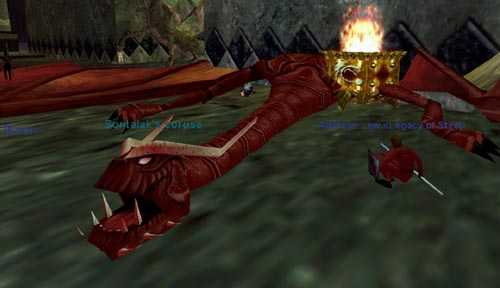 Sontalak:  I give this Mo Faka a 10 rating in the Fun Category

So the plan of Sunday was to kill King T.  Let me think of how I can describe this to you without spilling our entire Tormax Strat.  Bascially, when LoS fights Tormax, we fight him alone.  Cough it up to the two empty bottles of Tequilla sitting on my counter, the raging headache and the two hours of sleep I got, but basically I called attack today on Tormax, his two pets and eventually two more giants. . .oh, and a wolf.  Some might argue that the idea of fighting all those mobs was just plain stupid.  For many though, it was a freakin blast.  In case you're wondering we got him down to to the K in King Tormax during that clusterfuck.  If you're ever feeling bored or just not uber enough, I highly recommend fighting Tormax that way sometime.  I liked Mud's way of putting it:

Anyway, we did die on that attempt but quickly rebuffed and pulled him (unfortunately solo because the pets were dead).  He dropped some nice l00tz for the guild:

Only the second time the crown has dropped but I was gone for the first so I never posted a screenshot:

Grats to Siddean on the head, Arlos on the hat, Parv on the Gloves, Manalope on the belt and Metopious on the bracer.  Oh, and thanks to whoever loaded King T up with the gimp schwag weapons.

We also killed Sontalak.  I think they might have upped the faction hit on him.  Killing Sontalak took me from Ally to Warmly.  No big deal, you're probably thinking but consider that I had just come from killing Tormax and I had killed the Statue and Vindicator a few days before.  Oh well, takes a lot less than faction to give me motivation to kill shit.  I just wish there were some more Giants worth owning to get faction back up rather than having to wait on two one week spawns.