The Night Everything Had To Die

Lendiniara the Keeper, Stanos, King Tormax, Derkaor the Vindicator and the Statue of Rallos Zek DEAD

Lendiniara Dead for the first time on The Nameless

Holy killing spree, batman!  We went crazy tonight.  It was awesome.  In a near perfect kill we took out Lendiniara the Keeper.  She was the only First Brood dragon that Legacy of Steel had not killed.  So we finished our collector's set by smacking her ass to the ground tonight with near flawless execution.  Here's what the big beeotch dropped:

So Lend is dead and it's EARLY.  She went down on the first try.  We had time on our hands.  We start thinking of what spawns are up and can't come up with anything.  The only thing left to kill is the North Wing stuff and we're not QUITE ready to hose our faction just yet.  Desperate for things to die, we whisked off to Highpass to wax Stanos for Cyni.

The cacksugger didn't drop the head.  We're sitting there waiting for respawn to try again when Brad McQuaid calls on my private line to let me know that King Tormax has finally re-popped in Kael since the last time we assassinated the bastard.  Off to Kael we went! 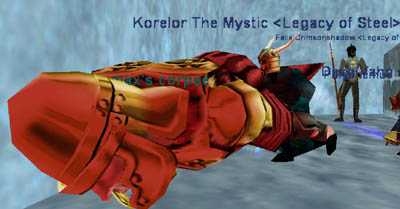 I mentioned last week how we had tried to take out Tormax AND his pets all in one rush last time and managed to get him to K___.  Well tonight was freakin epic.  We just pulled King T and his two buddies and beat them silly.  Was a classic, hilarious battle.  I once read a thread where someone said, "Some people have the balls to pull King Tormax to the zone to fight him."  I'm sorry, sonny, but until you pull the King and Co and fight them all at once, don't talk to me about balls.  Loot was a bunch of phat stuff so we gave it all to Crazz because he is a Halas-hating barbarian.

Oh. . .so King Tormax dies. . .of course you have to kill Keldor for the shield when that happens.  So add that poosae with too-good-loot to the death list.

Our thirst for blood could not be quenched.  While all this was going on the Statue of Rallos Zek pops.  So Tormax and Keldor are down and we rush over to the Arena and quickly dispose of this chump: 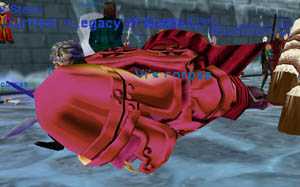 If you think the Vindicator is easy, you should see how amazingly easy he is when a jealous, petty, psychopathic wanna-be gimp enchanter isn't there training clerics of vallon zek on you.

To complete the ownage of Kael, we took down the Giant Hunk of Metal. . .a.k.a. Statue of Rallos Zek:

And here's his loot. . .which means only one thing:

So that was our Monday night.  All within a few hours.  Goddamn that was fun.  Oh and in case you were wondering or cared, we cleared the first three warders in ST again over the weekend.

And the worst Warder Loot ever -- beat this: