Many years ago when I was in elementary school I remember meeting this kid named VInny on the playground.  VInny seemed like a nice guy.  He invited me to play a game with him  At first, I was unfamiliar with the game.  Slowly VInny explained all the rules to me.  They were complicated but I learned quickly.  After awhile, I got to be so good at the game, that I kept beating VInny.  Poor VInny had some ego issues it seemed because each time I would beat him at his own game, he would change the rules on me.  Man, VInny was a spoiled brat.  I think he grew up and works for some computer company in San Diego now. . .

As most of you know Kael was brought down last night and patched.  The ability to charm the majority of mobs in the zone was removed.  You don't need to be a rocket scientist to figure out the reason for this nerf was because of the recent AoW killings by LoS/SoS.  While our victories over the AoW were perfectly within the rules of the game, VI decided to alter those rules.  I've read that there are over 300,000+ Everquest subscribers.  I find it fascinating that a company took the time to alter their game to basically say "screw you" to 80 of those 300.000+.  What's worse is, this nerf wasn't a "thumbed nose" at LoS/SoS for killing their "unkillable" mob.  This nerf affects a vast array of people.

Enchanters you are now buff whores.  Time to start a rogue.

Druids lost their ability to charm wolves.  Back to casting PoG and dying after your first fire debuff.  Hey I think the Monk needs SoW -- zone out to WL.

Exp groups and Armor Farmers now have to deal with uncharmable giants.

Smaller guilds who used pet tanks on Vind and Statue can no longer use those methods.

Many claim the AoW is now unkillable.  I haven't decided yet.  Give me a few tries and I'll get back to you on that one.

Perhaps instead of bringing down Kael, Verant should have re-patched Everquest and removed all classes but Warriors/Clerics/Rogues/Wizards and while they are at it they can remove CoV faction from the game.  Not that anyone had much reason to be on CoV faction in the first place (thanks Dozekar NERF, 2 tears per kill), but this is like the last "fuck you" that CoV guilds are going to stand for.  With ALL the things wrong with this game -- BROKEN quests, BUGGED pathing, WARPING mobs, endless UI GLITCHES -- Verant takes the time to bring down a zone because 80 people out of 300,000+ killed ONE mob?  Not only that but their solution is to fuck over enchanters, druids, anyone on CoV faction?  Of course no one is surprised.  We've seen countless nerfs.  But this honetsly has to be one of the most RETARDED, knee-jerk reactions I've ever witnessed.

We're not your goddamned beta testers.  We're not your Quality Assurance department.  Either start sending me paychecks or cut out this "live beta test" bullshit.

You want Dragons dead and not Giants? Fine, here's your fucking dead dragon: 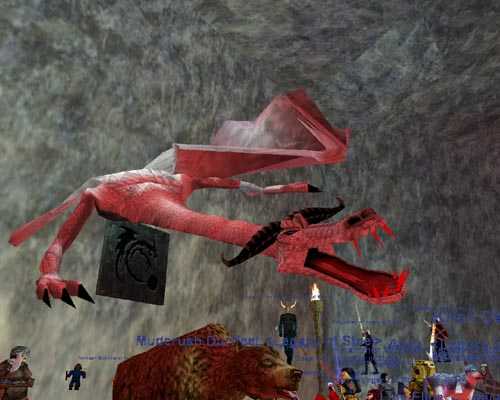 How bout fixing the fucking wall panel?  Bring down Skyshrine and fix THAT you dipshits.