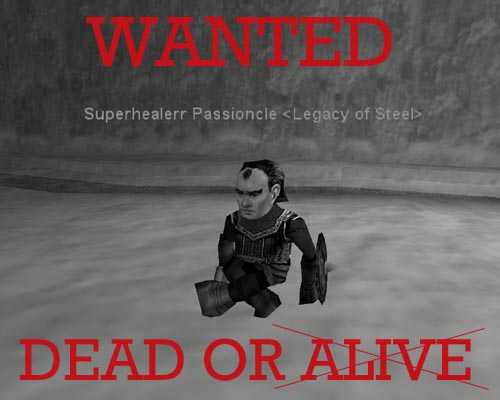 Reward for capture: 5000pp (see below for details).

Be on the look out for a balding, mis-matched, loud-mouthed halfling cleric on The Nameless.  Last seen in Thurgadin, Superhealerr is wanted for a number of crimes.  His first offense is being a loot whore.  Please refer to Exhibit A:

Secondly, there are reports that this foul criminal moonlights as a level 60 Bard on The Nameless.  In a highly dangerous undercover op, I was able to pose as a druid and draw out Mr. Passioncle's true identity.  When Mr. Passioncle requested information of a place to solo in the mid 30's, I suggested the Bard in SK to test where this dangerous criminal's true sympathies lie:

As you can see, the two counts against Superhealerr are reason enough for drastic measures to be taken.  Loot Whoring and Bard Sympathizing simply cannot be tolerated.

Your Mission Should You Choose to Accept. . .and The Reward:

And lastly from the lead GM of The Nameless. . .