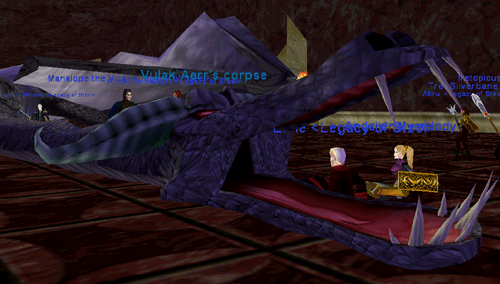 Apologies for the lack of updates.  I didn't play EQ for a few days so there wasn't much for me to post about unless you want me to ramble about being the first guy to get kicked out of the new mall in my town.  It's honor I'll take to the grave with me.  Yes, there's a new mall in town.  They spent three years knocking down the old mall and built a new mall.  God bless capitalism.  Luckily I now have five, yes count 'em, five Starbucks all within 10 blocks of where I live.  I am the holy center of the Starbucks Pentegram.  Fear me, barista.  You might be wondering what any of this has to do with Legacy of Steel or Everquest.  Well, nothing really.  What do you want me to do, brag about keeeling Vulak yet again?  He's a big, fat, suck-ass poosae.  "But he flurries now!"  Ok, I'd rate him 2.2 instead of 2.1 on the difficulty scale now.  Oh, I was really happy about one thing last night. . .we killed Vyemm, Vulak and cleared ST (minus Ventani) and I didn't die once.  Hot damn.  There's something odd about seeing Aego fade -- not used to that shit.  I didn't realize Aego COULD fade.

Here's some phat Vulak lewtz.  Congrats to Moca on these:

We got some other nice stuff as well.  Ariel finally got Jaelin's, which kicked her HP up to insanity levels.  Scored some Druid arms for Kareit as well.  Vyemm dropped two of those new clubs, Dragonrib Whatevers.  All in all, was a really fun night.