Look for the Three Dead Poosaes 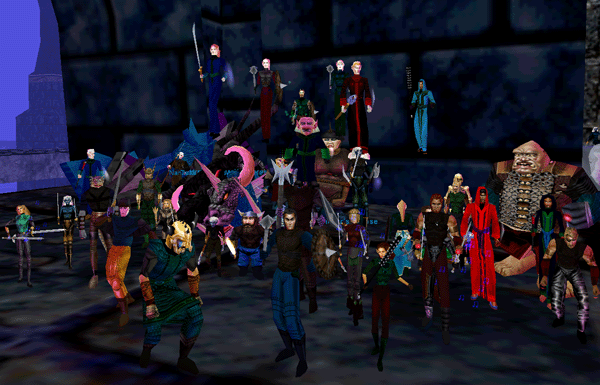 We dropped the Three Blind Mice in record time yet again.  This is where you run off whining to the General Forum trying to get us to quit EQ because we're bored.  We're not bored, we're just finding new ways to have fun.  Just because we kill three dragons quicker than most exp groups can kill three frogloks is no reason to get your panties in a wad.  We're having fun figuring out just what to do with Ventani as well.  He is definitely a new a challenge for us.  I think we're doing something right. . .

. . .but then again, what do I know?  He actually was much lower than that, at enraged.  A little fine tuning of the strat and a perfect execution and you can wave bye-bye to those three poosaes pictured above.

So I haven't updated the site lately.  I slacked this week because I got a new computer and basically fucked up all my files and internet connection in the way only a true technical retard like myself can manage.  But as you can see I am up and running now.  What did you miss out on?  Let's see. . .Tormax, Yelinak, Sontalak. . .oh, we almost won the ring war.  One of the last giants snuck through at the very end.  Goddamn that war is fun.  I always have a blast doing that.  Oh and a special message to all those "spectators":  There's nothing I can do about you being in the zone but if you're gonna be in Great Divide when the war is going down, earn your keep by beating on some giants. . .a.k.a. "Carry your lag."

Of course Vulak died this week: 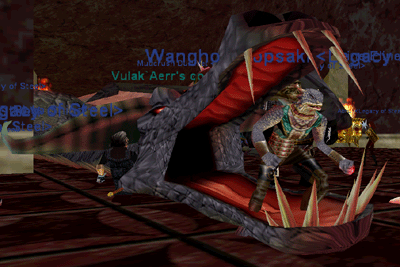 As you can see, loot was kickass.  He also dropped the shoulders again.  My homeslice guild hooked a jigga up with the bracer so I was a pretty damned happy halfling.  /huggles GUILD!  teehee

So at a certain point in this game you find yourself running out of new things to do.  This picture sums that up: 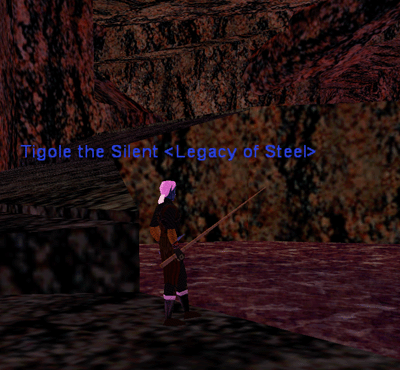 Fishing in the Koi pond, ToV

So this lack of new frontiers leads me to this next, special segment of this update.  Please indulge me.

Dedicated to the Rogues of The Safehouse

My homies at The Safehouse can relate to this.  This is for all you old school rogues.  This is to every rogue who played for months before EVADE ever existed.  This is for you rogues, like me, who used to get put into the Necro groups on Naggy runs because it didn't matter if we died.  Most of all this is for every rogue who ever lost out on Ravenscale because some fucking druid bought it, farmed it, made you roll on it, for their fucking TWINK.  I present to you the ultimate rogues revenge on the druids: 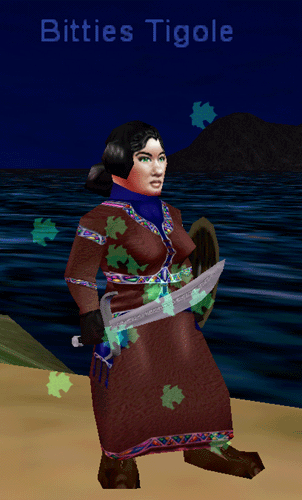 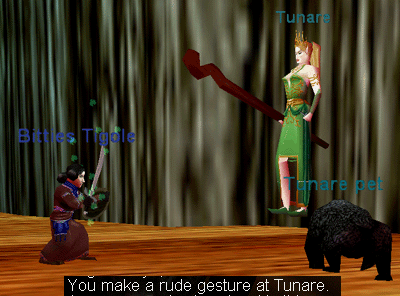 Rest safely, fellow rogues, knowing that druids all over Norrath are feeling the sweet bite of revenge as my Level 50 druid-sux-twink runs around weilding a Nature's Walker Scimitar.  Actually, I shouldn't be too harsh on those treehugging hippy druids -- their epic quest sucked 100 times worse than doing the Ragebringer quest any day of the week.  Who knows, maybe I'll get bored with Bitties and give the fucking sword to Mort.

Stalker of the Day