Just Another Day In The Life of the Evil Empire 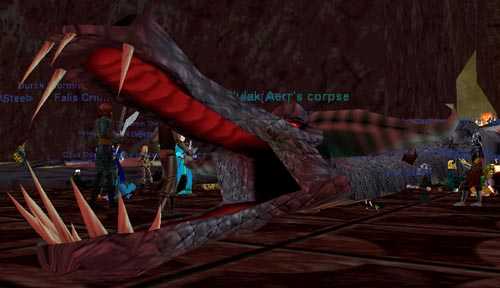 Vulak's not so crazy about patch day anymore. . . .

It's that time of the update where I post some *new* Vulak loot.  By new, I mean new to The Nameless of course:

Vulak also dropped the fatty shield which went to Manalope the Vicar so he can fown you foolmans in the EC tunnel that much quicker now.  Ariel was stoked to get the necklace -- she has some INSANE equipment now, go check her profile.  And the Helm went to your's truly.

Ok, please indulge me in a very SMALL rant.  Hobart's War HELMET (key word HELMET) has no f'ing graphic!!! WTF VI!!!!  I wanna look goofy, I wanna look fugly.  Hook a jigga up. . .give that bad boy helm a graphic.  It's not a crown, it's not a circlet, it's a HELM, dammit!  Everyone please support my latest crusade to have this Everquest atrocity fixed as soon as possible.  Yes, I am the same crusader who saw to it that Leatherfoot Sandals ended up with no grahpic. . .we can do it!  March on San Diego!  (As you can see, I only care about the truly IMPORTANT issues in Everquest).

Hrm, so here's some pictures of dead crap in ToV (like anyone cares): 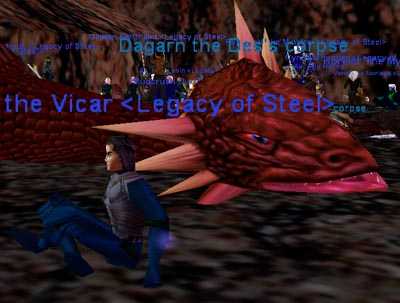 Dagarn ponders who made him a bigger poosae than he already was. . . . 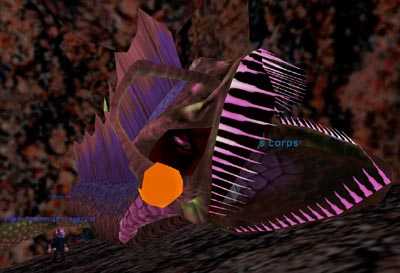 Koi wishes he was as tough as the poosae-fied Dagarn

Kriezen wonders if he could beat up a flurry drake

In other news, we fought the Ring War the other day.  The war is terrific fun.  We had a ton of people show up to help us out and to them I am very grateful.  Everyone in the zone was working as a team and it was a great feeling seeing things go so smoothly.  Unfortunately, even though we *won* the war, Narandi got away.  I had the mo faka agro'd, took his Harm Touch, but got just out of his agro range and he ran off to EW.  Needless to say it was a VERY lame ending to what was shaping up to be an awesome night.  Everyone was very let down.  After all, we killed all the giants and Narandi was next on the list.  It's not like we didn't engage Narandi either. . .oh well.

In my continuing efforts to keep this webpage cutting edge, I am introducing yet another feature to the site.  Yes, from the guild who brought you "Mort and Gage, Uber Bankers", "Stalkers, Wanna-be's and Unoriginal Bastards" and "Welcome to the Wonderful World of My Tells", I now present to you "Strategy Advice:  How to be Uber".  I am sure my guild will be pissed off.  After all we worked hard to come up with each and every l33t tactic we use, but I feel it's my responsibility to the EQ community to share the vast wealth of knowledge we as a guild have come up with.

Strategy Advice: How to be Uber

AFK Message of The Day