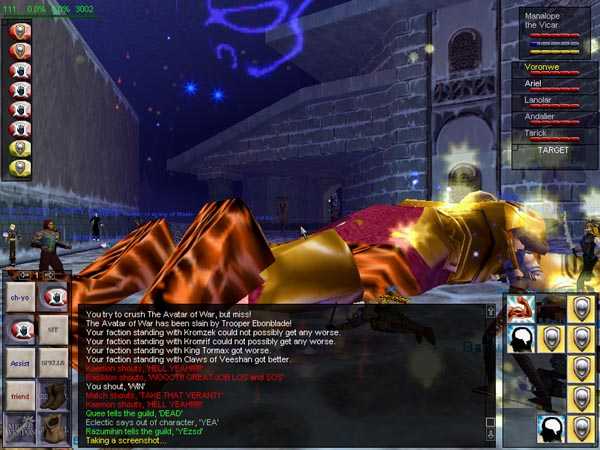 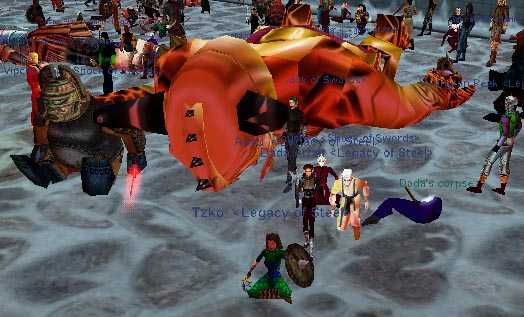 A truly epic weekend for LoS, and a purely picture perfect ending to the Scars of Velious expansion for the Evil Empire.  Let's start with the finish -- the AoW.  Once again we partnered with our good friends Shock of Swords to bring this bitch to his knees and then some.  I lived for 90% of this fight and I can say that everyone involved was simply perfect tonight.  You don't end up killing a mob like the AoW by getting lucky.  And what a fun time!! Seeing this cacksugger die is one of the single biggest rushes you will ever be fortunate enough to experience in Everquest.  This kill meant a lot to us as well because as most of you know you can no longer use charm giants to tank and you can no longer bind in the Arena area of Kael.  Basically, for all you donkey-raping-shit-eaters who doubted us the first two times, take your foot out of your mouth and look at those screenshots.  And yes he dropped new loot.  I will let Durck, the new head honcho over at Shock of Swords spoil it for you if he's in the mood.  We were also happy to get two more pairs of monk pants -- congrats to Lenardo of SoS and Metopious, my drinking buddy, of LoS -- as well as another Ring of Destruction which went to Ariel, appropriately the first tank on the AoW as well as the captain of the ToT team.

This weekend the finals of the ToT III were held (or I should say are being held) on Rallos Zek.  There was a storm of controversy surrounding this event.  As you all know, I am relentless cacksugger if ever there was one toward VI.  However, I must say, I had an absolute blast at the ToT.  Well, before I get ahead of myself I should start from the beginning.

Check in time 9am:

So we log on to Rallos and of course half our team never made the copy-over.  I had logged off in Thurgadin.  Upon logging in I got to have my first taste of life on Rallos Zek:

I enjoyed being called bluebie and care bare and being told to play on a "real server."

The vent staff begins to summon everyone to the arena.  I think when they hit around 400 people they realized what a bad idea that was.  So they told us all to zone out to Lake Rathe.  Um. . . ok.  Needless to say Lake Rathe crashed harder then Princess Di and Dodi in that tunnel.  The next few hours were spent trying to get team members copied over, trying to get people out of Lake Rathe and into one spot.  The true fun in ToT is getting to meet all the people from other servers.

Of course, being an international sex symbol, there were cyber tells to be made:

Eventually, we got to fight our first match.  There was a slight delay in getting our team to the Arena:

(next time please change his name to Frank, Lady D)

We were pitted against The Dark Exile from the 7th Hammer.  Apparently the 7th Hammer had two teams but only enough showed up to form one team for the finals.  They had a choice of going up against us or Afterlife.  They chose us because we were the *easier* opponent. 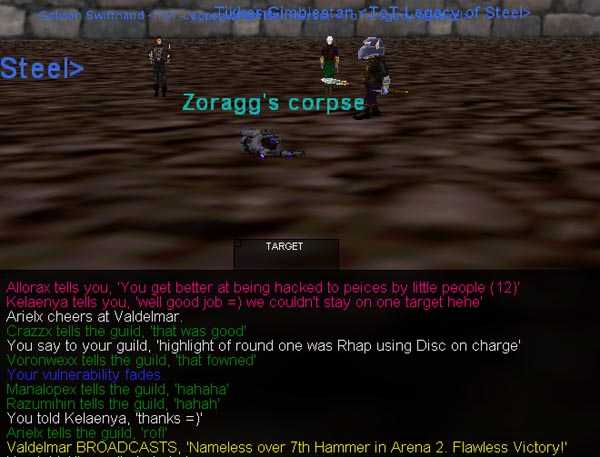 The team from TDE was extremely cool and I had a lot of fun chatting with some of the members.  The TDE were very good sports about the loss and I consider it an honor to have faced them in our first match.

After that, we had a 4pst match.  Our first match ended around 1pst.  Around 7pst Lady D broadcast that the match was postponed till Sunday.  That's a whole shitload of time to kill.  Did I mention we were in TOX?  Bleh.  But what was fun was getting to bullshit with all the RZ people.  I don't buy the RZ stereotypes at all.  Sure some of the lower level players are straight outta counterstrike, but the level 60's I was chatting with from AD were pure class.

The next day was the big match for us -- LoS vs AD of Rallos Zek.

It truly was a HARDCORE fight.  For being carebare bluebies we held our own.  Someone correct me if I am wrong ( and I am sure you assholes will) but I believe the final score was 15-12.  So, 15 RZ standing at the end, 12 LoS.  Admittedly, we were not prepared with Soulfires.  We only had one Soulfire and only one charge was used throughout the ENTIRE ToT III from server to RZ.  I think we would have really been a force to contend with if we were prepared better.  I don't think the use of Soulfires was cheap in any way.  After all, it was clearly allowed under the rules. . .some of us just didn't have them.  Part of Tactics is preparation folks -- if you weren't ready you have no one to blame but yourself.  Personally, I'd like to see NO Soulfires allowed in future ToT events however if they are allowed, rather than bitch and moan about it, I'll be one chealing mo faka stabbing you in the ass.

And let's face the real issue.  Most of the servers spend less than 1 percent of their EQ time doing PvP.  If you want to test our tactics or prove who's boss. . .give us a mob to kill.  Oh wait, that reminds me:

And now for an extra special, star-studded edition of. . . .

Quote of the ToT III