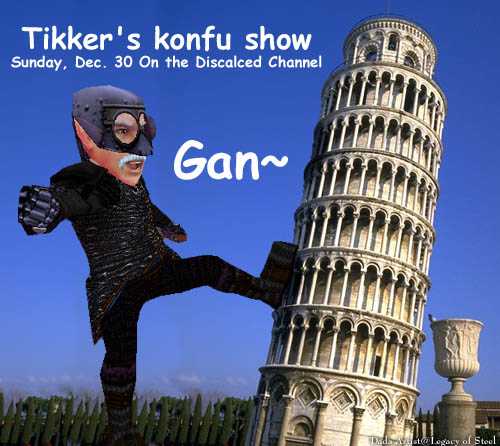 Finally an update!!!  Apologies for the little vacation there -- it wasn't by design.  All of my web programs decided to stop working at the same exact moment.  You gotta love installing a bunch of 30 day trial programs all on the same day.  Yes, I am a cheap bastard but oh-fuggin-well.

Many things have died since the last update, some old, some new.  We recently killed this guy again:

The Glyphed goes down and we go to pull the Exiled.  Well, guess what?  We found yet another "poof" spot in Ssrae.  I now know of half a dozen places where you can "poof" mobs in that zone, as well as one area that involves a nasty warping bug (bug not feature) and another area where you can get summoned for 10k damage.  If someone from VI Quality Assurance is bored and wants to take a short break from watching Days of our Lives some day, please log onto The Nameless and come to Sssrae with me -- I'd be happy to show you some things which could most likely be easily fixed.  Perhaps you'll even come with some urgency if I mention the fact that the "poof" spots can be used to exploit errant trains.  OMG a bug that works in favor of players?????

All kidding aside, I love that zone. It's really one of the best done zones in the expansion.  I actually like the fact that common loot was left out for the most part -- keeps the gimp factor low there.  I just hope they fix some of the bugs.  And for the record, the worst zone in SoL is AR -- what a piece of shit.  Note to the guy who came up with the l33t traps:  Less is more, homie.

Things have been rather slow the past week.  We're lucky to have 30 people on even at primetime.  This is also that funny time after an expansion where everyone either quits EQ or else makes their big return.  My favorite are always the people who left a few months ago with the big, long, jaded goodbye posts.  They'll post how much EQ sucks and take cheap shots at people and pat themselves on the back for how strong they are to be quitting EQ for good.  Anyway, we all quit EQ at some point -- some of us just realize it's best not to burn a bridge until you cross it first :p

So maybe I am just a bit touchy right now because it is New Years Eve.  The problem is I live in Pasadena where, since the dawn of time (or so the Tournament of Roses Association would have you think) the Rose Parade and Rose Bowl take place.  To most, these events are part of American Tradition.  To me, it's a big phat pain in my ass.  All these piss drunk cacksuggers flock to the streets, park in every goddamn spot in existence, crowd the stores and generally go out of their way to make me miserable.  Looking out the window I see a touch of grey in the sky.  God I hope it rains down a river on those motherfuckers.

I think my true hatred for the Tournament of Roses and for all these assholes in MY streets has something to do with New Years Eve 1995. . .the dawn of 1996.  Unfortunately, I am a big fan of USC football.  I say unfortunately because I never got to experience the glory days of Charles White, Marcus Allen, or the numero uno pimp mackdaddy tailback and cold-blooded killer, O.J. "The Juice" Simpson.  No my experience with USC football has been loss after loss, season after season of defeat, and too many coaches to remember.  So 1995 rolls around and we end up with Keyshawn who for those of you who don't know or care was basically Jesus for the USC football team that year.  Amazingly, somehow. . . .perhaps the planets were alligned right. . .perhaps the rest of the Pac 10 just sucked that much harder. . .USC goes to the Rosebowl to face Northwestern.

So being a USC football fan and living in Pasadena it's basically a given that you go to the Rosebowl on New Years Day.  But there is New Years Eve to contend with first.  My friend, let's call him. . .um. . .Nigel.  My friend Nigel comes into town to go out and party then watch the game the next day.  After a bottle of tequilla and a case of beer are left behind we get the brilliant idea to walk the 2 blocks to Colorado Boulevard to see all the freaks camping out for the Parade the next day.  The whole scene is weird.  First off, there are these guys from the Tournament of Roses Associations who are like Marshalls or some shit for the Parade.  Well, these dudes walk around in WHITE suits.  They ride around on scooters and carry walkie-talkies.  They are like Hitler's gay Gestapo.  I don't know about you but I don't trust any guy wearing all white unless he's selling ice cream or dragging some nut into the looney bin.  Anyway, Hitler's gay Gestapo is patrolling the streets along with Pasadena PD and about a million drunken assholes, all of them seemingly Northwestern fans.

Well, being drunk and completely unreasonable Nigel and decide that all of these Northwestern fans need to be showed up.  See USC fans don't rush to the streets and sleep out like trailer trash when their team makes it to the big game.  Luckily, Nigel and I were there to represent the side of USC that USC rarely cares to admit exists -- the drunken, shit-for-brains, low class side.  Hey, it's a rough job but someone's gotta do it.  Nigel and I go back to my apartment and get some more liquor.  While we're there we find this giant Trojan Horse staff.  Don't ask why or how someone has a goddamn staff with a horse's head on it, but shit, I had one that year and the next thing I know Nigel and I are back out on the streets leading a parade of USC fans past all of these Northwestern stiffs.

Words are exchanged.  Most of them friendly jabs.  But then our good friend, the booze, decides to take charge of the scene.  We get to the end of the parade route, crashed 3 backdoor parties, were kicked out of 3 backdoor parties and finally find ourselves a block from where I lived at the time.  I am carrying the staff down by my side and Nigel is walking with me.  A car drives by and we could clearly hear the words, "USC sucks" yelled out the window.  Without much thought or hesitation I replied with the simplest, easiest thing that came into my mind at the moment which of course was, "Pull over you pussies and I'll beat you down harder than I beat your mother last night."

Boy was I surprised when the brake lights came on.  The car skids to a stop alongside the curb and three of the biggest motherfuckers I've ever seen jump out of the car.  The smallest of the three was still a few inches taller than me and easily had 30 pounds on me.  The biggest of the three could get a job working in Hollywood as a giant.  At this point I am in that slow-motion mode that comes with being severely intoxicated or in moments of traumatic shock (i.e. near death experiences) or, in my case, a combination of the two.  Nigel's first and only words were, "Give me the stick."  Huh?  What the fuck is Nigel talking about, my slow mind wonders.  "GIVE ME THE STICK!"  His urgency made me realize he wanted the Trojan Horse Staff I was holding limply at my side.  This didn't seem like a good time for cheerleading but what the hell, I thought to myself and tossed Nigel the staff.

Nigel, who is in fact shorter than I am, grabs the Trojan Horse staff like a Louisville Slugger and takes a Babe Ruth wind up at the three EXTREMELY large motherfuckers running right for us.  As if in slow motion, I watch Nigel swing the staff baseball-bat-syle right into the largest guy's chest.  The Trojan Horse head breaks off the staff and falls to the ground.  At this point, I'd love to be able to relate moment by moment what happened next, building up the dramatic tension of the coveted fight scene I just worked so hard to set up but in truth what happened next is this:  The shortest of the three laid a right jab into the side of my head and instantly knocked me out.

Cue Chris Tucker from Friday:  "You got knocked the fuck out!"

The beautiful thing about being knocked clean unconcious is that you have no idea when you come to if you've been out for 10 seconds or 10 hours.  In fact you don't much besides the fact that your ear and the side of your head hurts REALLY bad.  So I find myself laying in a bed of flowers.  And there really was something rather peaceful about being there because after all I live in a city and it's not often I find myself lying in beds of flowers.  Looking back now, some six years later, I realize that the very bed of flowers I was laying in was probably a veritable bed of dog piss and god knows what but at the time, it seemed like a very "nice" place to be.  "Nice" is a relative term especially considering when the alternative to lying in the bed of flowers was standing and getting knocked out again.

But being the tough guy that I am, the killer, death on two legs, I stand up and try to figure out what's going on.  My buddy, Nigel, is in a head lock getting punched.  The whole while he is muttering things like, "You beat me.  I'm a pussy.  You guys win.  We're done."  Amazingly, be it the holiday spirit or perhaps the fact that we offered as much challenge as a couple of old ladies, these corn-fed mo faka's let me and Nigel go with no further beating.

So the one fight I've been in throughout my adult life goes by, I never get to throw one punch and I get knocked-the-fuck-out within the first 15 seconds of it.  We sure showed those assholes who was boss.  Is there a point to this story?  Well, no not really.  This story exists so that you might all be able to understand why I hold the hatred I do for all these cacksuggers invading my town for New Years.  Perhaps if they were all 5'3" and weighed 100 pounds I wouldn't mind. . .I could go around enforcing my bad-ass ways and show these assholes who the King is.  But I'm stuck at 5'10", 145 pounds and the sons of bitches outside can mostly put a hurting on me by looking at me too hard.  Did I mention I am going out of town tonight?

What's any of this got to do with Everquest?  Nothing. . .

. . .and getting back to EQ. . many new sections.  I was trying to think of a good title for the next one but instead I only came up with:

Life in the AE Group 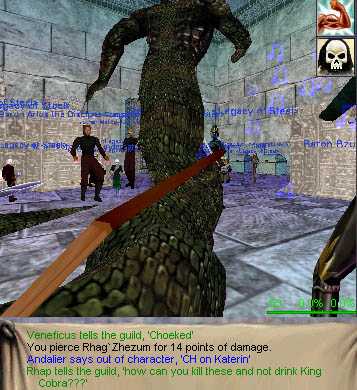 Random Picture of the Day