Back In Business In a Big Way 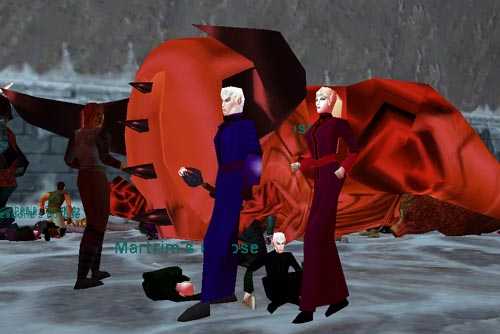 Once again, masters of disasters Legacy of Steel and our good friends Shock of Swords bring you the Avatar of War, face down and dead as dead gets.  This was in essence a "pick-up" AoW raid.  On previous attempts, SoS and LoS planned the dates and times carefully for our AoW assassinations.  Tonight we finished up our raiding early and caught wind that the Statue (which we were told was killed the night before) was in fact up.  So we head to Kael and I send Durck a tell, Come kill AoW.  Durck responds, NOW?  A short while later we're taking screenshots and enjoying our AoW phat l3wtz.  What can I say, this is the fourth AoW we've killed now and it still feels damned good to see him drop each time -- that magic of killing something that can easily wipe you out cannot be beat in EQ.

Sooooooooo our fucking website. . .don't even ask me what the problem is.  All I know is welcome to the new home of Legacy of Steel.  So much has happened that this update is going to be a big fucking mess of old and useless information.  Before I get too deep into it, I must post the most CLASSIC picture you will see.  There is only one title that suits the picture you are about to lay your eyes upon and that title was coined by none other than Homer Simpson himself, "DOH!" 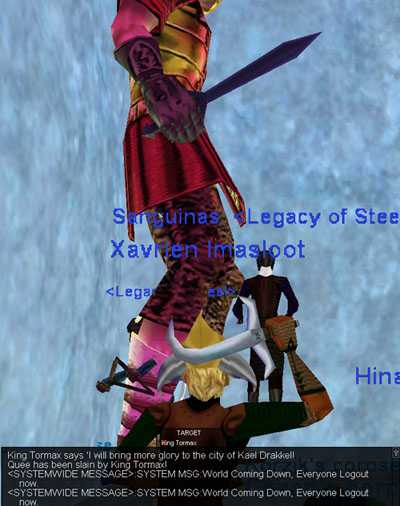 In case you were wondering, we killed him and were able to loot two Horns and a pair of boots.  The boots and one horn made it back after the patch -- one horn and the head were however lost forever in the world of Poof!  Poof -- something SoL has acquainted us with rather nicely.

Speaking of SoL we have been having some entirely shitty luck with random poofs, shitty drops and all sorts of bugs and what not.  Still, we're having fun and ripping shit up.  Well, actually, this guy destroyed us tonight: 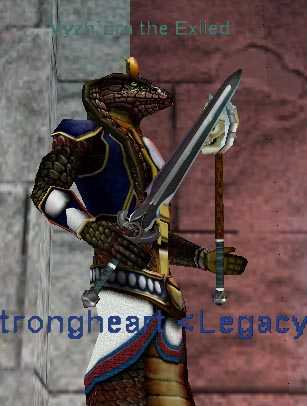 Dual wielding mo faka is just a prison rapist -- we died and he had NO red left in his hp bar -- gg us fux up.  Oh don't worry, we have killed Mr. Exiled just fine. . .

But we only prefer to kill him when we get shitty Monk only (Beastmaster who?) loot which rots on the ground and pisses off suck EC Tunnel twink monks. 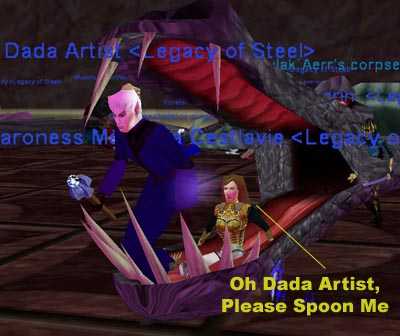 So I am supposed to be ranting about some SoL stuff but the truth is I am still pumped from that AoW kill and I am fucking-A tired right now.  Well wait, I can rant a little bit.  Ok how should we start this one.  I know let's talk about Verant and maximizing the time of their expansion.  Let's face it, VI needs this expansion to last a good long while.  So what do they do?  They add keys to get to uber mobs, thus slowing down the *discovery* of Luclin.  That I can understand.  In fact I like that notion.  It seperated the men from the boys in Kunark with VP keys, and likewise proved who had their shit together in SoV with Sleepers.  But in Luclin it seems, rather than having keys drop off of HARD mobs (a.k.a. EARNING your key to the next step), keys seem to be RARE drops off of RARE spawns -- thereby rewarding the Lucky and Unemployed.  Now to add to this retarded idea of RARE drops (rather than drops off of HARD mobs) you have all you gimps out there who decided to passover the necessary *key* step to get to uber mobs and you fuckers exploited the doors.  Well congrats on your awesome EQ FIRST, dumbasses, and as a result of your ub3r l33tn3ss Mages get a big phat dick in the ass nerf of CoH.  And when CoH gets nerfed is it just the mages that get punished? Oh no, it's everyone.  Stuck in traffic on the way home to a raid?  Tough shit -- not there on time, you're fucked.  Good fucking going exploiting dumbasses and good fucking going Verant for not having half a clue that if you put locked doors in people are gonna get past them.  Here's an idea VI -- rather than nerf mages, how bout you go check on who's killing mobs behind locked doors -- look at their loot -- then see who has key.  No key?  Conquest their ass.  Don't fuck the rest of us over because some lazy gimps can sploit a door.  And for crying out loud, put keys on HARD mobs -- not rare drops on rare spawns.  Are you looking to reward the skilled players or the lucky and unemployed?

Speaking of bullshit, no fun keys, we did Griegs the other day.  Wow, that zone can suck a phat cack.  Rhap sums it up best:

The novelty of Grieg's wears off in about 2 minutes.  Add to that I dragged 30 people there to kill some raid mobs, and we get the big phat shaft on the key there as well. Weeeeeeee so much fun.  Maybe I am a tad bitter because the day before we were doing the AC ring and had the 5th and 6th boss both spawn us at once -- that was fun.  After wiping out to that, we started the ring again, kill the 4th boss and POOF! Script over!  Weeeeeeeeeeeee.  SoL beta testing at its best.  Oh, I mentioned Grieg -- forgot to tell you we managed to get him to spawn in Ssrae -- I think it's part of some larger SoL Quest: 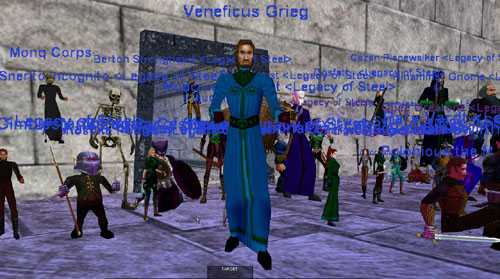 Later, I saw Grieg in AC so I guilded him: 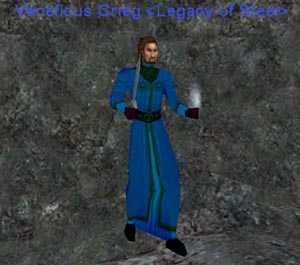 Other than that we've all been working on AA skills.  Metabolism and Charisma are the guild standard priorities.  And if you're really bored in your exp group, pull Mr. Rumble: 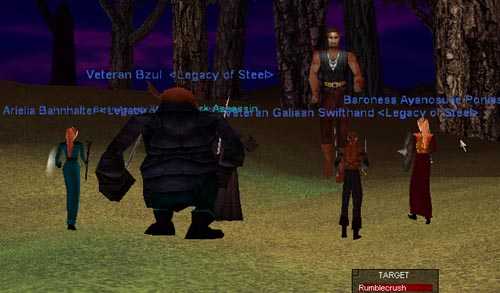 That was fun for some laughs.  No, killing Rumblecrush is not much a feat in the world of EQ but doing it with your exp group is fun and by posting this here I just saved 2000 people from having to read some Numbnut's "RUMBLECRUSH DOWN!" post on the Nameless Tavern.

Goddamn I am tired.  I go sleep now.

Feign Death of the Day

Ok, I ignored about 90 percent of you the past week. . .but some made it