As a service to the Everquest community I am posting this so that others are aware of the major, glaring bug that seems to have slipped into EQ.  Apparently, by entering the zone called Temple of Veeshan your guild roster is likely to DOUBLE in size.  Be warned, scheduling a raid in this zone can even seem to activate accounts that have sat dormant for weeks.  No need to worry, Verant has a team of programmers working on the problem which at this point is only being referred to by the Latin name:  Lootius Whoreius.

And now on with the news. . .(yes considering what CNN calls news these days, even a slackdaddy like me can post a bunch of bullshit and get away with calling it *news* I guess)

We cleared ToV last night.  At one point we had three dead dragons on the ground which I thought would make a nice picture for the website.  So I took this: 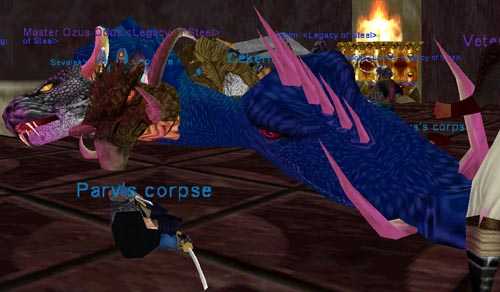 But then I got to thinking that it would be a nice gesture to try to include the people who made those dragons dead in the picture as well.  I tell everyone to gather around the dragons but to not block them.  After a few futile attempts of trying to explain the concept of *not blocking* the dragons, I ended up with this fine picture:

Yvang summed it up best:

That's all for today.  I've got to much shiznit to take care of to write more.

Ok this next Crazz scene took place as he was Cannibalizing himself into shaman FD position when an untimely spawn popped:

Feel the Love of the Pull Group