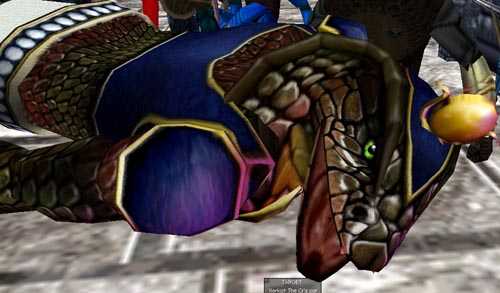 So during our weekly assassinations of our good friends the Glyphed and the Exiled we checked the doors like we always do (ever since some doors were changed from not pickable to pickable) and discovered that Xerkizh the Creator was now up for grabs.  I am still not sure if this was a wise, well thought out design desicion or if some monkey in quality assurance, chained to a cubicle, is getting beat right now in San Diego.  Either way, this was the first time we have been able to take a shot at this mob without fear of Ssploiting the doors -- and you bet your sweet ass we took advantage of the opportunity.

The fight was pretty fun.  And the loot was absolutely re-goddamned-diculous.  Check out this bullshit:

Well, actually that mage dagger is pretty nice and I give phat props to VI for putting in some Caster loot but of course we had no mage there in Ssrae so congrats me on the Dagger, just what I always wanted.  Too bad people got mages nerfed by Ssploiting the doors -- we might of actually had a mage with us to loot it.  (cue dumbass flame on messageboards)

Here's a picture of the Creator fight for anyone who actually gives a rat's ass.  Note the l33t strategy:  Bard Tanking! 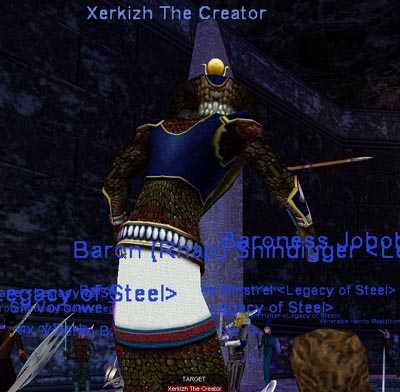 So I gotta tell you guys about our Glyphed fight because it's actually worth mentioning.  We are fighting Mr. Glyphed Covered Cacksugger and everything is going very smoothly.  There is 0 doubt that we will beat him.  He's even holding a Dagger we have never seen before -- something with a new graphic and piercing.  He enrages and then gets to no visible life and begins to flee.  What happens next???? POOF.  He vanishes.  Then he is back on his spawn point, full hp, and summoning people.  So we pull him back to the group and have to kill him again.  To tell you the truth killing two Glyphed in a row, with no pause, back-to-back was a really fun fight.  I wonder if that is "working as intended" as well.  Fucking buggy ass zone.  Oh, here's that dagger:

At first we're pretty excited.  After all, the dagger would be pretty sweet.  Then we notice it's OFFHAND only.  To add insult to injury the HASTE is a fucking PROC that lasts 18 seconds (18 mo faka seconds?).  ROFL.  Yay, more useless loot.  And p.s. VI I bitched about too much monk loot because I wanted CLERIC and CASTER loot -- not 10 million fucking daggers.  What is with the uber goddamn weapons on Rhag 1 -- the biggest poosae in all of Norrath???  Jesus Christ you guys give new definition to the phrase "knee-jerk" -- sheesh.  Save the uber weapons for the uber mobs (p.s. Rhag one = anti-uber mob) and put CLERIC and CASTER loot on those fool poosae push-overs.  I know you guys all have level 17 characters on test that you levelled all by yourself and what not so you know your game really well but try this sometime guys:  /buff up some level 60 characters then spawn Tunare and Rhag 1 and try to beat them both -- get back to me on who is harder.  Oh wait, I bet you chumps die to both =P

You know I constantly bust VI's balls.  The truth is, I love their game and think it's sheer brilliance.  I just want it to reach its full potential.  So for all my criticism of VI, I am their biggest fan.  But goddamn, why not consult with some players before implementing some of this stuff?  We've all come to accept that Everquest is an eternal work in progress.  You have all these people who live and breathe the game -- why not use them as a resource?  Oh well, what do I know. . .