From The Company That Brought You Gems. . .

"Our target is a game environment that neither suffers from an empty, under-crowded feel where grouping is difficult, nor a cramped, overrun setting."

Dear god.  I know you crazy bastards want me to rant about this bullshit but do I even need to?  I took some time to visit the "uber guild" sites from each server and on the vast majority of them you have people complaining about overcrowding and lack of spawns.  This is the solution?  Pay 4 times as much to get what we're paying for in the first place?  So let me get this straight -- and please be patient with me, I am slow -- instead of dedicating time and money into coming up with a solution that would improve the gaming environment for EVERYONE serverwide, VI sinks its cash and resources into forming an exclusive server for those willing to pay 4 times what anyone should be paying in the first place?  Ever wonder how much the guy got paid to rip-off Maeglo's design and make those websites or how long that took him?  Wonder how much time and money that l33t map tracking thing cost.  Wonder how many GM's are spending time creating dynamic content for those people.

The next time you're sitting in ToV with a bugged corpse stuck in a wall and waiting two hours for a GM to show up just picture those lucky bastards on the Legends server fighting Vulak in West Commons with 5 GM's watching them.

Why fix problems and bugs when you can charge more money and ignore the mass population?

My favorite part of this whole EQ Legends scam is the whole notion that now you're going to get to "Buy Fame in Everquest" -- ROFL.  Um, ok.  I know I'll just be clamoring at the EQ Legends website each day to figure out who my Hero is going to be!!! Nothing earns my respect more than some guy paying 4 times as much as me for a free shot at doing the things I have to work my ass off to do because VI simply doesn't give a shit about me, my server or the 30 others like it.

I did like the part about the Legends losers getting all the new loot first.  Thank fucking god.  At least someone who is paying Verant a shitload of money might get them to realize that they have no concept of how loot works at the end game.  I'm sick of bitching about what a bunch of bullshit the majority of SoL loot is.  Anyone noticed that Rhags 1 and 2 drop better loot than the Arch Lich?  Wait!! Not my problem anymore.  Let some rich fucker kill the Arch Lich and he can bitch about the loot and get it upgraded!!! After all, it will have his name on it!!!

Oh wait, I shouldn't bust on Legends too hard.  I want everyone from The Nameless to move there.  Yes, I love you guys and we're all such a great community but wouldn't you be better off on Legends?  Come on, you know you would. . . By the way, don't let the door hit your ass on the way out.

So welcome to the Era of Uber.  Being Uber is no longer an elitist privilege you earn by being the best -- oh no.  Get your AA skills, your serverfilter, your magic resist patch, your Safehouse spoilers, your EQ Legends and BAM -- isntant FAME.  You are a GOD.  We all worship you now.  Welcome to Everquest where being Uber is not a right, it's a marketing scheme.

And as a friendly reminder -- to all you moving to the Legends server -- please keep in mind:  We're laughing AT you, not with you.

So us poor ghetto folk over on The Nameless have been busy killing mobs -- here's a sample of the carnage and loot: 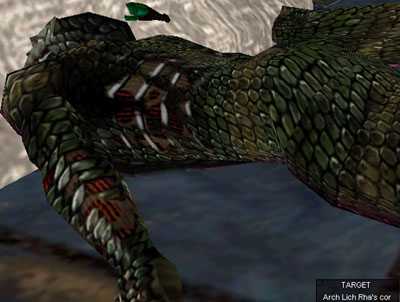 Here's some of the loot from these cacksuggin snakes:

I have some exclusive insider info I acquired for you all on the Batphone -- this loot will all have its name changed.  Here are the new names you can expect to see next patch, thanks to EQ Legends:

Dagger of Some Rich Loser

Shield of Some Rich Loser

So there you have it.  Excuse me if I sound jaded over this whole thing.  I am jealous -- yes, I think that's it.  You see, I refuse to pay $40 a month and it has hit me hard that I will never become famous in Everquest -- my life long goal.  I am bound to live in obscurity, paying 10 bucks a month without people calling me names like l33t, ub9r, godlike or Mr. Oxlong Cock.  Sigh. . .life sucks.

Signing off with my head ducked down in shame because I will never be an EQ Legend,

The Gnome of Own 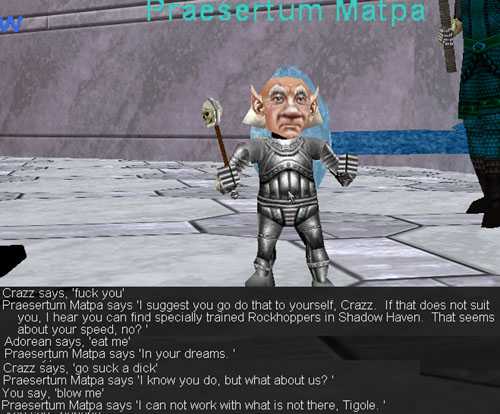 Blown Spawns of the Week on The Nameless

Number of Spawns blown by LoS = 0

Working as Intended!!! Fun for everyone!!!  Just think, if we were allowed to actually kill these things, we wouldn't go kill other, easier things!! Wait that would mean more spawns for everyone!!!  The fucking goat's talking crazy man!!!

Jangos, our resident PR rep, explains the Ring War to the general population of Great Divide: