This chump-worm went down quicker than the Canadian Hockey team

Hi, my name is good loot, nice to meet you.

Actually, that chump worm is gonna take a whole lotta plat out of the Norrathian Economy in coffins alone.  He seems fairly gimp-proof for the time being.  So we killed him tonight and had a blast doing it.  The night before we killed the Thought Whoring Overbiter.  It's pretty classic reading the forums right now.  I've been following all the threads with people posting about how *upgraded* the THO was.  First of all, I see fools from my own server posting about him when I know for a FACT they haven't even been in the same zone as him since the patch.  Yeah, he is soooooooo much harder now.  What a massive upgraded he got.  It's no wonder he went down harder than Team Finland and we had. . .um. . .0 deaths.  But who's counting.  Take notes kiddies! 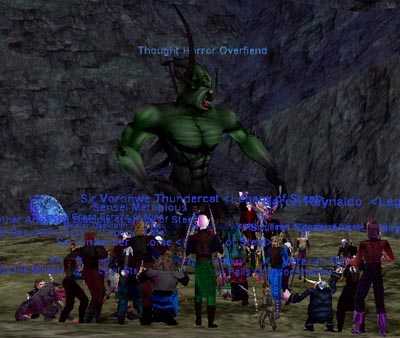 Oh and since we were in The Deep on Valentines Day, I we thought we'd all put on our red lingerie for you:

Have a fun weekend everyone.  And Happy New Year ;)

"He's got amulets and magic rings out the wazoo. . ." -- CNN
The new section dedicated to eBay Manalope