Legends:  "You can piss down my back but don't tell me it's raining."

I won't dwell on Legends for too long today.  Yes, I could sit here and write a novel on why Legends is a bad thing for the majority of Everquest.  But I simply don't have time.  I just didn't want the opening of the new Legends server to pass by without being able to say a quick and heart-felt, Fuck You In the Goatass, to all involved with it.  I've heard all the arguments before about getting what you pay for and "don't go to McDonald's and expect Filet Mignon" and other such brilliant and well thought out defenses.  I haven't seen such legal spindoctoring since Johnny Cochran helped my beloved Juice (go Trojans!) murder two people and walk away scott-free.  But let's face the facts, all of the features that were promised to us with the release of SoL are still not here.  Seems to me Legends is a pretty new service.  Doesn't it surprise anyone how fast the "new" Cazic Thule was revamped for the server?  Could it possibly be the jackass whose job it was to make the Bazaar work like it was ADVERTISED was instead buffing up Lizards in CT for Daddy Warbucks on Stormhammer?  Where's my new interface?  Where's my new visible armor?  Like it or not folks the people on our Poor Folk Ghetto Servers spent money on PROMISED features which as of today do not exist.  You guys still going to run and defend the Legends losers with the old, "You get what you pay for" jibberish?  Guess what?  We didn't get what we paid for.  I went to McDonald's expecting a goddamn Big Mac, not Filet Mignon, and you know what I got instead?  A Shit Sandwich.

Now that I got that off my chest, let's talk about "stuff dying" because after all, this is an Everquest website and it's my job to post a bunch of big dead things and talk about just how cool we are.  So here comes that line of nonsense: 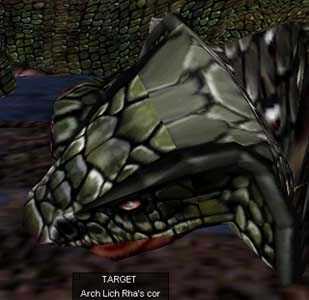 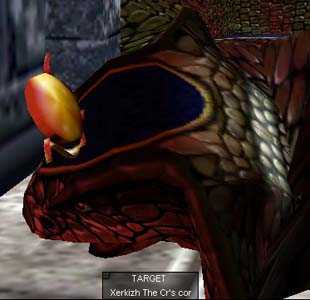 So, um, we killed some snakes.  They were incredibly difficult to kill.  The Creator required our whopping force of 32 people to kill.  The victory was flawless, not a single death.  I Sseem to remember Ssomeone Ssaying that the Creator was more difficult than the AoW.  Excuse me while I try to stop laughing.  So anyway, we had the opposite of the Night of Suck on Monday.  We were unstoppable.  Because of the late patch we had very low numbers but we just kept killing with almost all flawless victories.  As far as loot goes, well, we were prison raped in that department.  Check out our Creator loot:

Now, before some DW-wearing ooooober, Fiery Avenger-wielding rump-wrangler goes to the messageboard and tries to tell me how awesome this garbage is, keep in mind that out of our 32 people there we had exactly ZERO paladins present and ZERO shadowknights present.  If anything in high end EQ needs to be ranted about right now it's the ratio of WEAPONS vs. ARMOR dropping on uber mobs.  For most classes, if you think about your "best of slot" item in the *known* game at this point, it probably drops in North ToV still.  I don't know about you guys, but I'd rather see some nice bracers or rings dropping than 2 billion rotting piece of shit weapons off every mob we kill.  Perhaps this garbage loot is just sitting there waiting for the eventual and inevitable gimp-i-fication of these mobs which is surely just around the corner.  But for guilds who killed Vulak since last summer, who have been killing Tunare and the AoW, well, all these goddamn weapons are getting really old.  To put it in perspective in Ssrae -- SK and Pally have weapons that drop off of the Basement mobs, the Arch Lich and the Creator -- all of which rot every single time they drop for us.

Here's an example of decent loot that doesn't rot off of a Ssrae Mob:

Speaking of the basement mobs, I guess rotting loot is better than what drops off the Runed.  At least you can give that rotting garbage to Mort to annoy noobs in Thurg.

Don't get me wrong, that Creator fight was one of the best times I've had in recent weeks in EQ.  Nothing beats a flawless, well executed raid.  But so long as loot is rotting, you will hear me bitching. 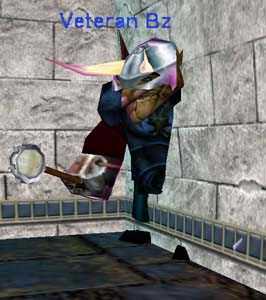 Bzul logs in to find that he's stuck in the wall.  He cannot move.  He tries to camp out and come back to see if it fixes the bug.  When he re-loads, he is greeted with a 10k fall to the basement.  So how's the new Cazic Thule?  How's Marauders Mire?

Crazz tells everyone they need a "Rampage" hotkey.  Of course, no one makes one.  Except for Rhap:

Assassination of the Day