Welcome To The Ghetto 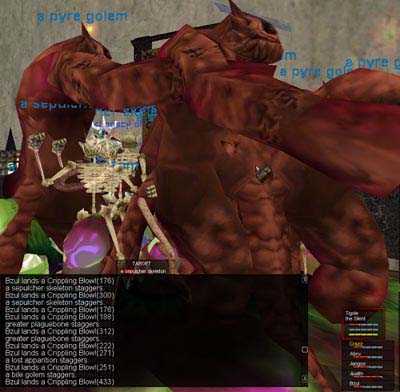 When the Shadows of Luclin expansion went live we saw the return of the much dreaded "exp group".  Sure, we remember spending hours on end watching that yellow bar creep at a snail's pace across our screen (yeah, you whippersnappers today are spoiled with this blue line bullshit).  We'd sit in dungeons as one lucky puller would bring one or two mobs to the group.  Nothing like sitting in one corner for hours at an end.  Well, with SoL we started to see the "AE group" in action.  Now, on The Nameless, we hate these elitist AE cacksuggers.  Fuggin wizards and enchanters who want nothing to do with melee.  Suddenly you have monks soloing mushrooms and wizards getting all the groups.  Then there were the "rest of us" -- rogues and what not that just sort of tagged along to any group we could get.  Personally, I lived in Ssrae for months camping those goddamn keys.  But I finally got all my keys, all my rare components, all my "campable" shiznat.  And I am straight up bored to tears with exp.  I don't care if you give rogues the AA ability to cheal, DA, reserruct, AE sunstrike -- I am goddamn bored of "grinding" exp.  I wont do it.  End of story.

Then the beloved Sloot of all Sloots, Jangos, comes to me and tells me about "The Ghetto AE Group".  My first reaction was, hey fuck yourself -- those cacksugger wizards and enchanters wont give me the time of day.  But the Ghetto AE Group is a totally different story.  Anyone is welcome.  Just be ready to have your ass handed to you if you don't know what you're doing.  So far the Ghetto AE Groups have consisted of 2 Shaman, 2 Bards, 1 Rogue and 1 cleric and another featured 1 warrior, 1 druid, 1 shaman, 1 cleric, 1 bard and a rogue.  Dungeon of choice:  Howling Stones.  OS and KC are very nice as well but the problem is the way Ghetto AE works, we'd end up getting warned or banned when the pooooooosaes in OS or KC (who enjoy calling "non-existent" camps and sitting on their ass for hours at an end) complain that we are "stealing spawns" or "training" when in fact we are just owning shit like it was meant to be owned.

So it's off to HS!  First stop, the zone in of course.  This is where we pull all the golems, the two zone in mobs and all the "picture room" mobs from North, West and South wings.  The best part of this pull is the fact that at any moment some innocent fool can zone in and be greeted with 20 mobs! 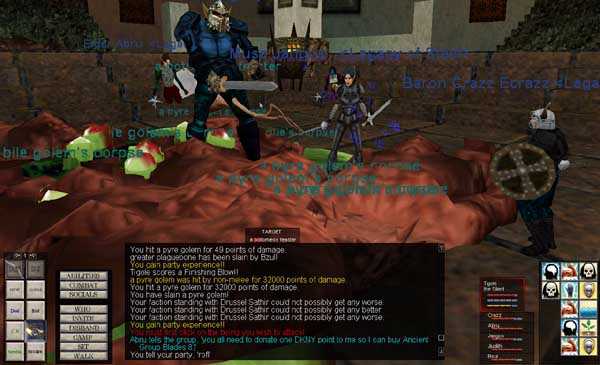 Actually I just wanted to show off my 32k bow shot to make Rangers squirm. . .

As soon as you clear the enitre front entrance of HS in one pull, it's time to clear North Wing in two pulls! 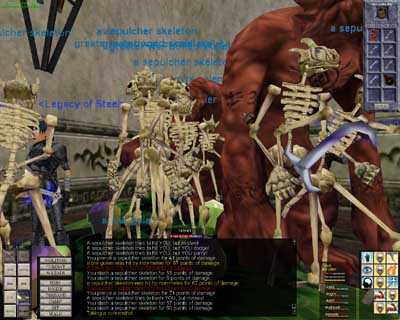 Next stop, West Wing in two pulls!  Then it's down to the pits.  The pits, depending on the group, are a one or two pull affair. . .one pull being ideal: 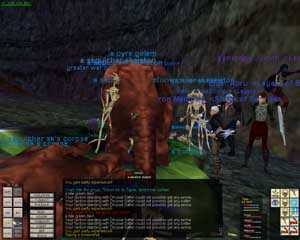 The whole theme of the Ghetto AE Group is, "If we don't come close to dying, we're not trying hard enough."  Currently, the record number of mobs in one pull stands at 23.  Now I know you mo faka elitist caster AE groups will scoff at that with your 40 mob pulls and what not.  But we're talkin' G-H-E-T-T-O AE group here folks.  Honestly, this is probably the most fun I have had in Everquest ever.  It has nothing to do with gaining experience toward AA points -- it's all about being as wreckless as possible, coming close to dying (or dying) and sitting at home simply laughing my ass off.  So to those of you on The Nameless if you happen to see the Ghetto AE Group in a dungeon near you, remember, that's not a train -- that's our pull goddamnit.  Oh, and please don't whine.

So what else is new with LoS?  Lemme see. . .um, we went to Veeshan's Peak because we were bored.  Here's a picture of Phara Dar and Xygoz dead:

So I am challenging my guild for the next run:  We need a picture of 3 dead dragons together.  Or 4.  I think it's possible.

We also killed the Arch Lich and the Creator again.  Those mobs are becoming a regular snooze-fest.  I really hope they fix the goddamn Arch Lich AE or set it back to the old one sans bugs this time.  Either that or load up the Arch Lich to drop 10 helms, 10 sleeves and a Tendonslicer for Rhap (yeah, he wants one for some reason) and we can never go back to AL again.  This is the part where one of you whiney bitches flames me on the messageboards for "getting things while their easy then wanting things hard for everyone else."  Sorry chump, it don't work that way.  I want things hard FOR US but we'll take this easy bullshit as a reward for beta-testing for the farming you will do a few months from now. 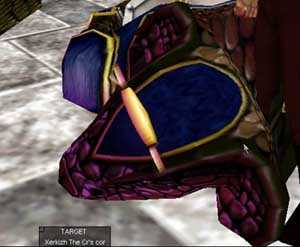 Creator dead, one death, a mage who charged the room first -- hahahahaha.

We also did ToV for the first time in something like two months.  I was ALLY to CoV to put it in perspective.  I did 0 faction work, that was just from Statue/Idol/AoW kills.  Feeling ashamed of my CoV faction, as if I was somehow a lousy dragon-killer, we went and killed the only two mobs up in ToV at the time -- Aaryonar and Dagarn.  I thought Aar was really fun the way he is now.  A semi-difficult encounter if you fight it like it was meant to be done.  So Aar and Dagarn are dead and we're thinking we cannot come to ToV and not try the famed "Ring of Vulak" before leaving.  I decide to be a responsible leader and "scout" the ring before sending the troops in.  I run in there, trigger the spawn, get a wurm and some drakes on me and die as expected.  We take notes on what spawned where, where the DT drakes spawned etc.  So we wait for it to reset and then go to trigger the Ring with the entire guild and this happens: 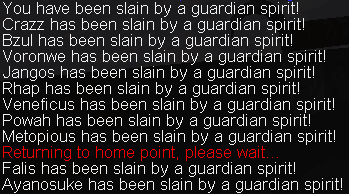 I guess I am a dumbass and have no clue what I am doing.  Obviously we did something wrong for that DT to happen because as we all know, the Ring of Vulak is for all intents and purposes "working as intended" according to VI.  If it is in fact, working as intended, I question the design choice that creates an encounter where one small screw-up by one person leads to 40 people dying instantly requiring a necro CR which as we all know takes hours (only because everyone who plays the warrior class seems to die in WW whenever they enter that zone).  If nothing else, the Ring of Vulak was the comedy highlight of the week.

Ok, time for a new section of the web page.  I really don't even know where this came from.  Let's just call it, Potty Talk.

Well, romantic is the last word I would use to describe Ginsberg's work but I was glad someone recognized the source =P

And here's how the guide staff feels about you guys: