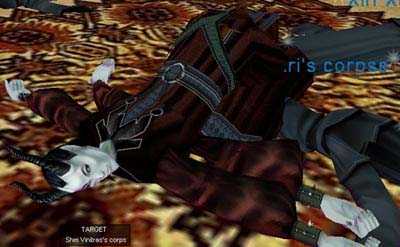 Unfortunately for this dude, the suck had to come to an end. . . 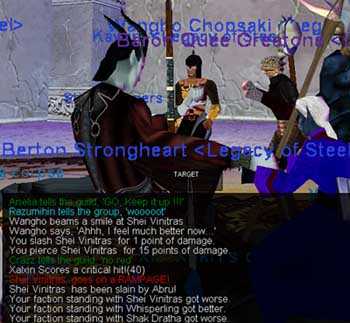 We were desperate on The Nameless.  Flustered, panicked and at a loss for what to do I ran to the Batphone (tm) and called the Commish.  Within a short time Legacy of Steel was joined in Ahkeva Ruins by none other than Karl Malone, Al Capone, and of course Sly and Frank Stallone.  End result:  Week of Suck is quelled by the Night of Own.

So yeah, we killed Shei Vinitras in what was, if I am permitted to say (oh wait, I pay for the bandwith, I'll say whatever the fuck I want) a perfectly executed kill.  Simply amazing.  We had around 40-some peeps there tonight for the big kahuna and every last one of them simply did a bang-up job of bringing this cacksugger to his knees, then face.  This was our first win against the Shei and the first time he's been killed on The Nameless.  This is another one of those raids that can just go to hell and back so quickly if ONE person has their head up their ass and fucks up.  That was the beauty of it.  Everyone there was equally responisble for seeing this mo faka dead.

Here's the token phat lewtz. . .none new but all new to The Nameless:

Truth is, no one was really thinking about the loot.  Was just a nice kill to get, especially considering the Week of Suck which had plagued us.  You'll have to wait for the next time we kill him for me to start pointing out that the loot is somehwhat lacking for just how hard this bastard can be.

So feeling good and proud of ourselves for the Shei victory, we got somewhat masochistic and decided to head back to good ol Cazic Thule for everyone's favorite encounter Ring of Thule!!!  This little snippet of guildchat pretty much sums up the Ring of Thule:

We actually managed to get a named to spawn.  I think we popped him just in time to rape our dead bodies.  I'd post a screenshot of it but I was too busy running for my life and ducking behind low-hp casters waiting for Escape to pop to really give a shit about a named spawn.

Stalker of the Day 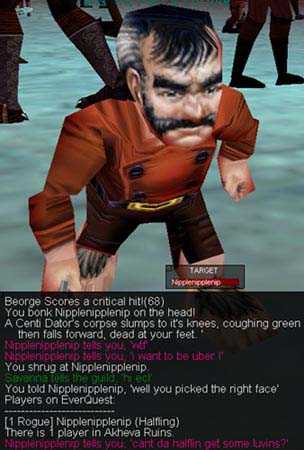 What can I say? Nipplenipplenip brought us good luck against the Shei~