Patch Day And Why I Need A Name Change

Ah patch day!  Patch day is like a nice, friendly game of Russian Roulette.  Always pioneers, and never chickenshit cowards, we decided to see just how fine tuned Vyzh`dra the Cursed really was.  Really, I am still laughing at this line of the Patch Message:  "Vyzh`dra the Cursed has been adjusted to help balance the risk versus reward associated with the encounter." Well, maybe we just suck, but all I know is we spun the chamber of the revolver, pulled the trigger and got a big phat BANG!  Instead of getting Vzyh'dra the Cursed to the usual 90 percent we used to get him to, we got him to about 98 percent before calling camp and laughing our asses off at just how "adjusted" he was.  BUT WAIT!!!  Let's all play Johnny Cochran for a moment!  Maybe what they adjusted was the REWARD and not the RISK!! I bet now instead of dropping 13/20 BST only claws and a 45/50 SK sword he drops 13/19 BST claws that proc snare and a 49/50 SK sword!

It was a fun patch day though.  I really like the "random" spawn times (although they could seriously use being more random).  We killed the Glyphed/Exiled and then the Creator and then moved onto everyone's favorite Fecal-matter-esque mob, the Burrower Parasite:

We got a robe which made the whole thing worth it along with two rings.  I have no idea if these rings have been floating around for awhile or not so I'll post them.  Alla-whatever and EQlizer have both been pissing me off lately with pop-up ads and register bullshit.  I have no time or patience for that bullshit.  So here's some loot -- I promise I won't make you register to look at it or deal with pop-up ads:

Note to VI:  Add Brilliant Stone Ring to the *Loot that sucks and belongs on something else* list. . .

Kind of funny that one of the few items that got upgraded in the patch was the Arch Lich ring which was already pretty damned sweet and didn't need an upgrade.  At least it got resists because that effects sucks a phat cack.

We were bored Friday night so we went to Veeshan's Peak.  It's a great exp zone now, especially with the asskicker crew of LoS wizards.  So here are some pictures of shit you've seen dead 1000 times before but I am losing my webhost this week so why the fuck not post them 1 last time for kicks?

That picture makes me teary-eyed for the old days, sorta reminds me of THIS update from way back when. . .ah the good ol' pre-manaburn days.  But alas we live in the day and age of Uber-You (tm).  First server-filter, then the magic resist patch, then AA skills. . .what next, caster focus items?  Oh wait, it's patch day!  So getting back to Veeshan's Peak, we pretty much go because we have a bunch of keys, there is stuff there to kill, and you can kill a VP dragon as quick as you can pull it now.  But goddamn I got GOOD loot!!!! I really don't think about loot too often.  I want my warriors to get high taunt weapons, I want my casters to get their FT as high as possible, and maybe some nice weapons and armor for everyone else, but as for me, well, I'm not really out for anything.  In fact I don't think I've ever looted a single piece of SoL gear that I didn't give to Mort.  But look what I got!!!! W000oooT!  I didn't even think this mo faka still dropped:

Thanks to my homies for the l33t sword.  Kinda funny that my favorite loot from SoL so far is a VP sword from two expansions ago. . .a comment on SoL loot perhaps?  I guess the HP dagger is pretty nice. . .too bad he's been jabowning us lately. . .

At this point I am just rambling and wasting bandwith, but oh-fuggin-well.  Since I got so many comments about the Ghetto AE group, I thought I'd share our latest little adventure to Chardok. . .I think the pictures tell the story just fine: 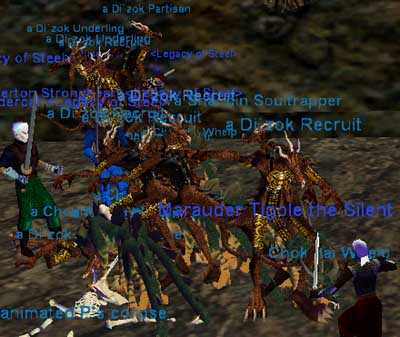 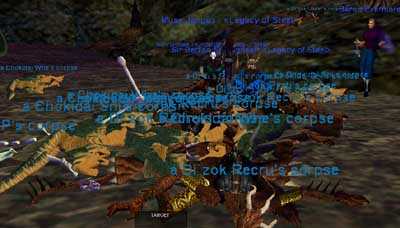 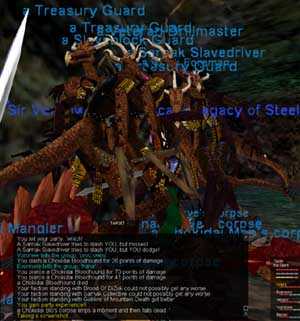 It's probably best that I just STFU now and go to sleep.  This update is a big mess.  You get the point though:  Things exist, we kill them, sometimes we get things we like, usually we don't. . .we complain. . .etc etc. . . sometimes stuff kills us, we complain some more. . . all in all, it beats watching TV. . .so it goes. . . 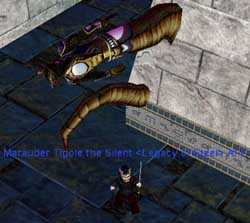 l33t guys. . .Note to VI:  Attack the mob you make it a point of singling out as "adjusted" in the Patch Message.

This is exactly the quote you don't want to see from your main tank: