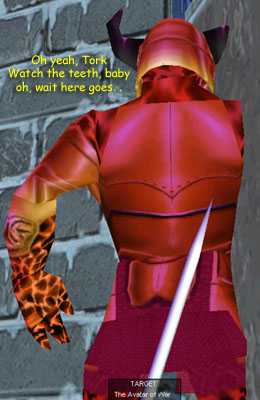 As everyone knows, we were the first to kill the Avatar of War.  And the Second.  And so on and so on.  In order to keep the encounter fresh we came up with a whole new strategy.  The amazing part of this strat is that it required absolutely NO casters.  All it took was a bard, a pair of kneepads and 20 rogues.  Make love not war, right?  So we spawned the AoW and sent in Tork, the bard who makes Liberace and Rip Torn look like the poster children for Machismo, and let him work his *magical* ways with the big guy.  While AoW was getting his jollies off, we sent in the 20 rogues who quickly backstabbed the mo faka into little pieces, leaving only a pair of Monk Legs, a Bard Mask and a Blade of Carnage behind.  All in all, everyone was happy, even Tork, who once done swallowing was noted as saying, "I think I just took more balls to the chin than Yogi Berra."

Right about now you're all wondering, "But Tigole!  What did your casters do during this fight?"  Simply put, we sent all our casters off with one mage who proceeded to summon everyone Focus Items!!!  Quickly our casters bagged all their Vulak loots, bagged those Tunare loots, bagged their SoL loots and donned their mage summoned Focus Items!  Apparently while Tork and the rogues were killing the AoW, our casters were able to kill Veeshan herself.  Why put neat-o effects on uber loot when you can just give it to free summoned shit so everyone can be uber!!!  I believe VI will be addressing the problem next patch though -- today as a matter of fact -- I have an advanced copy of the Patch Message for you all:

--Vha'Whateverthefuck the Cursed has REALLY been fixed this time (let's see if those assholes fall for it twice! oops did I just type that in the patch message.  hey abashi -- pass me the white-out, i need another hit)

--God Mode now implemented.  It appears AA skills, magic resist patches, serverfilters and mage focus items weren't enough for some gimps, no matter how hard we try they just keep dying,  so we here in San Diego said fuck it, and just threw god mode in!

--We removed Ranger weapons completely from the game.  We wanted to be consistent and that one shitty one on the IV was a real thorn in our side.

--By popular demand, corpse yelling was reinstated -- cong Manalope and your rings up the wazoo.

Let's See How Quickly the Freaks Can Get Chat Channel Names Nerfed!