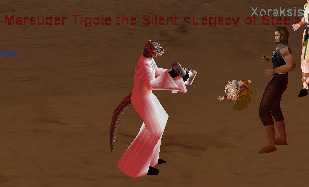 In my final abuse of Batphone Powers (tm) I convinced Verant to not only move my character to Rallos Zek but I was able to get a class and race change to Iksar Necromancer as well.  Now that I am on Rallos Zek I can make fun of all you Bloobie Poons (a term I learned on my very first day here!) for lacking the mad skeelz us Zekkers have.  Yeah, playing on my hardcore server I learned what real skills are all about -- farming right click items and learning how to bag droppable items as fast as I can.  I am one hardcore Pee Kay mo faka now and I laugh at all you blue poooooosaes.  Life on RZ is hard yo, I can only equate it to playing Quake with an engine that was designed for a MMORPG. . .oh wait.

In other news, my l33t insider connections hooked me up with some info that will rock the Everquest world.  Rogues (that vastly underpowered class) will be given the ability to Feign Death in an effort by VI to increase this vastly inferior class's desirability on raids.  Commisioner Gordon was kind enough to pay me a visit back when I still played on The Nameless, to grant me the ability to FD for various testing purposes.  I must say, during a recent Emperor Room wipe out the skill came in quite handy.  As a spokesperson for rogues everywhere, I just want to thank VI for this skill and let you guys know we're all eagerly awaiting the next patch when it goes live: 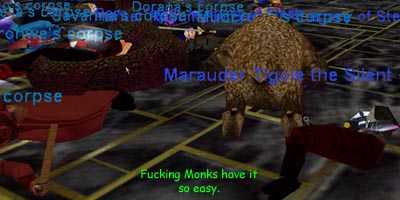 So there you have it, my weak-ass, half-assed April fools joke for this year.  Everyone knows what I posted is pure Foolsday bullshit.  Because after all, Verant would never actually test a skill before putting it live!

I guess I should have posted pictures of the usual dead bullshit but I'm not sure anyone really cares anymore.  I feel semi-inclined to rant about the sheer numbers required to kill some mobs lately. . .but instead I think we'll just figure out how to kill shit with what we've got.  Congrats to you *uber* studs who throw 60-80 people at a mob.  Call me jealous. . .or something.

Random Chat Text of the Day

So I am going through my screenshots for the update today and I came across this one and wasn't sure what exactly I was supposed to use.  Do other people have such fucked up chat windows?

Razumihin never gets stalkers because his goddamned name is so long and such a royal pain in the ass to type.  In honor of Raz, I present my level 7 Razumihin stalker: