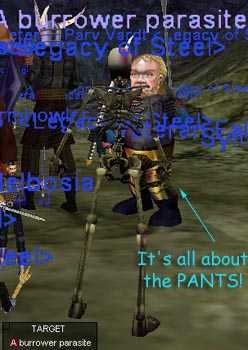 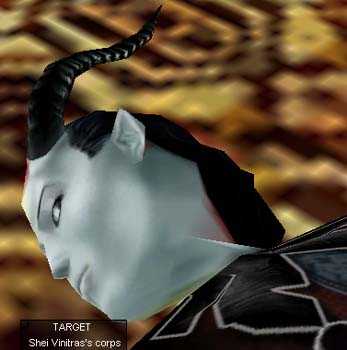 The Burrower stares in awe at *The Pants* while the Shei simply keeled over at the very sight. . .

Parv Vardt, Halfling Hero, was the first to discover the coveted Proudfoot Greaves quest, sending a ripple of controversy and dismay throughout the Everquest Community.  Ever since unveiling "The Pants", Parv has been overwhelmed with accusations of "insider info" and other shadey behavior.  After all, how could Parv have acquired the godly Jesus-like item of the trousers-community such as "The Pants" well before anyone else was even close to having so much of a clue as to their existence.  Well, suck it up lovers, we've got Parv and Parv has "The Pants" so you are all forced to live in your second-class existence of pantslessness.  The quest for "The Pants" is so painstaking and grueling, so time consuming, so incredibly difficult and requires so much skill, we estimate you wont see another Halfling warlord wearing these pants for at least 9 years.  Cry nerf if you will, but until we see that

First came the Burrower Cacksugger.  Our first tank up on the Burrower was Bzul who seemed to instantly go Linkdead.  Normally, as I've instructed my guild, when someone goes Linkdead we all /q, succor, evac, gate, train the zone or Ebay our characters.  However, inspired by the shining golden brilliance of "The Pants" Parv jumped in and one-tanked the Burrower to it's death.  As the luck of "The Pants" would have it, the loot was pretty fuggin phat:

Now that's what we like to see here on The Nameless.  Well, that and boobies.  After the Burrower died, we went to Ahkeva to work on our Vex Thal faction because we are so damned close to completing our keys all we need is faction.  And for the zone to exist.  And for the zone to have mobs.  And for the zone to have loot.  And for there to be a key.  And for there to be a key quest.  But besides that and our faction, we're ALMOST ready to zone in.  By the way, if any of you hurmorless jackasses goes and posts a moronic VT thread in my forums I'm not only going to ban you.  So anyway, as we were hard at work on our VT keys, we decided to kill Shei Mallown.  The Shei is what we call, in strictly technical terms, a tremendous pillowbiting poooosae.  The fight was all fine and dandy until we hit a small "Dumbass Speedbump" and lost like 3 people to enrage. . .Anyone who knows how the Shei works, knows that when someone dies to him, a mob spawns.  So you can imagine what it's like when the Jackass Factor gets the best of us, and people forget to press A when those big red letters E-N-R-A-G-E-D show up on the screen.  Our biggest fear was that Abru, our lone LoS druid, would be killed. . .:

In another news I would like to take a moment to talk about my personal life.  Today was a very special day for me.  In the mail this afternoon, I recieved notice that I had passed the State Bar of Arizona.  Along with a very official letter from the State I was happy to get my State Bar of Arizona Identification card, with my name printed on it and my official Bar number.  I would like to thank everyone who supported me all those years, the folks who had faith in me and helped me achieve this moment of greatness.  Perhaps the thing that makes this truly special (besides the fact that my life as I know it will from this day forth be changed, forever devoted to the Law of the blessed state of Arizona) is the fact that I never took the bar.  Nor have I ever lived in Arizona.  But I would like to thank the State Bar of Arizona for this fantastic vote of confidence in my legal skills.  I eagerly await my first trial and if any of you, my friends, should ever need legal representation in the courts of Arizona, rest assured that I, Tigole Bitties, have been deemed a worthy advisor for all your legal woes.  God bless the court systems and god bless our Government.  And no, I shit you not, this is 100 percent true -- somehow the jackasses of the State Bar of Arizona passed me, despite the fact I never took a test, don't live in Arizona, never applied and simply was fortunate enough to have the same name as some dumbass searching the back of his mailbox right now wondering if he passed or not.  Life is grand sometimes.  Maybe I'll move to Tuscon and try to legalize marijauna.