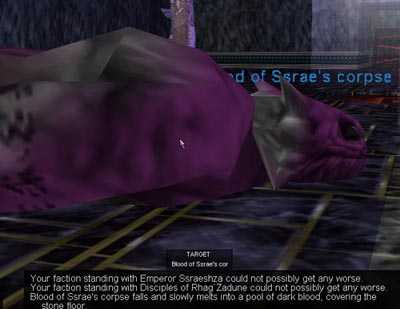 Fix your goddamn buggy bullshit half-assed encounters.  The amount of time we dedicated to get our keys to see this guy die and take a turn at the Emperor is just sick.  To finally see Blood die only to have the ENTIRE raid DT'd from anywhere in the room was simply an insult.  Blood dies, there are two earrings on the corpse, yet no matter where you are in the room, the Emperor DT's.  So congrats rot on those.  It's cheap enough to make a mob DT in the first place.  But to have his agro radius extend to the entire room is ridiculous.  So let me get this straight -- and this is how you guys envisioned this in San Diego:  You spend months farming keys to get up to the room.  Months farming Shissar Bane weapons (and the recipe is where?).  You kill Blood while dealing with 8 other snakes in the room.  And immediately after that fight you're supposed to engage the DEATHTOUCHING-FROM-ANYWHERE-IN-THE-ROOM Emperor along with the 8 snakes?  Whoever came up with this sheer *fisting* of an encounter can go fuck themselves.  Do me a favor so I don't waste my guild's time on this kind of jackass shit-fest again, send me an email at tigole@legacyofsteel.net when you decide to A) Implement an encounter that wasn't designed by a retarded chimp chained to a cubicle B) Get a Quality Assuarance Department C) Actually beta test the fucking thing and D) Patch it live.  And please for god's sake -- do it in the order I laid out for you.  Don't worry, I won't charge you a consulting fee on that one.  And for good luck you might as well E) Pull your heads out of your asses.  While you're at it rename the game to BetaQuest since you've used up you're alotted false advertising karma on the Bazaar and user interface scam of '01.

Fix the Emperor encounter.  Fix Seru.  Rethink your time-sink bullshit.  Fix all the buggy motherfucking ring encounters (I suggest you let whoever made the Burrower one do this since that dude apparently laid off the crack the rest of you were smoking).  Fix the VT key quest.  Fix VT (just guessing it's fucked up considering your track record).  Don't have the resources to fix this stuff?  Move the ENTIRE Planes of Power team over to fixing Shadows of Luclin AND DO IT NOW.  If you don't fix Luclin, you jackassess will be the only ones playing the Planes of Power.