Rhap Introduces Shei to the Cobra 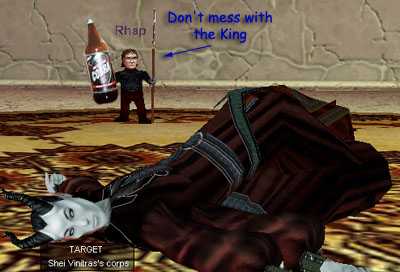 You got knocked *the fuck* out~

As a great man once said, "When I can't drink the Cobra 40 oz., I like to drink the Cobra 32 oz." (paraphrased from Rhap's Member Profile). Ah, such profundity is rare to find these days amongst the intellectually elite of the online gaming community.  But alas, we here at Legacy of Steel are fortunate to count Rhap as one of us.  Despite our best efforts to plot the perfect execution of Shei Vinitras, Rhap once again outsmarted the masses.  Rather than risk the lives of innocent women and children (mostly Crazz), Rhap bravely went forth to have a conversation with Mr. Shei.  Seems they settled things like true gentleman, with a drinking contest.  The Shei's last heard words were, "Blame it on the bottle" while Rhap's final words on the subject were. . .well. . .actually Rhap types too fucking slow so he didn't say much. . .

Speaking of perfect executions, here is what the actual fight looked like: 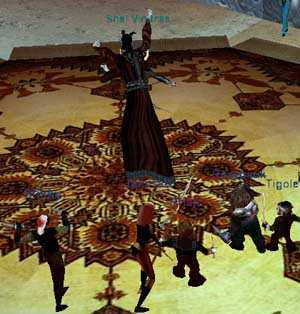 Before killing Shei, we killed that Mo Faka extraordinaire, the High Priest of Ssraeshza.  Despite the HP getting 3 complete heals from visiting neighbors (oops) the High Priest went down in smooth fashion. 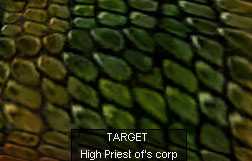 But the best news of the day was that we FINALLY had some goddamned luck for once.  Have I mentioned how much I hate rare drops?  Have I mentioned how much I hate bullshit timesinks?  Ok, I just want to keep repeating those words like a religious fanatic in an airport vestibule so that maybe. . .just maybe. . .someone in San Diego might become a believer!  So here is the good news:

This is the part where I make some cocky statement about killing the Emp soon but what the fuck, of course we'll kill the Emp.  And so will everyone else eventually.  Those little *soon* website updates are so last year.  Just look through my archives if you want to see the origins of where that came from.  Instead I'm gonna post a picture of the Emp full health and I'll just say, "Not even fucking remotely close but eventually we'll get lucky when some bullshit rare drop falls off of a bullshit spawn in a lousy exp camp which is absolutely no fun!"  Anyway, it seems the Emp is gonna die real soon.  My homies over on Povar, Team Ice (note: the guildname Triton is purely a front for the true pimps, Team Ice) are really damned close.  Hopefully my server transfer application works out ok so I can be the first to post on every other guild's messageboard and all over the safehouse when we, Team Ice, finally drop the cacksugger.

So that's about all you'll hear from me the next few days.  I was lucky enough to score playoff tickets to the next two Kings games.  Unfortunately, if there's anything I hate more than Seru bane or Shissar bane weapons it's got to be Patrick Roy.

Whenever there's a GM event on The Nameless, at least 30 people need to send me tells saying, There's a GM event in Dreadlands -- get your guild here quick -- you need to slay the dragon!! Or whatever bullshit mob the GM's decide to be.  I've noticed a trend that the GM's seem to prefer either being A) a Dragon or B) 100000 Skeletons or C) 100000 Werewolves.  But I digress.  Well, let me save everyone some trouble.  I could care less about GM events.  If a GM wants me to kill him so bad he can come track me down and challenge me to a duel.  Those events are lag-ridden jackassfests.  Here's some commentary regarding the latest GM event on The Nameless:

Any Stalker becomes too annoying, I'ma send the Sl00t after you. . .