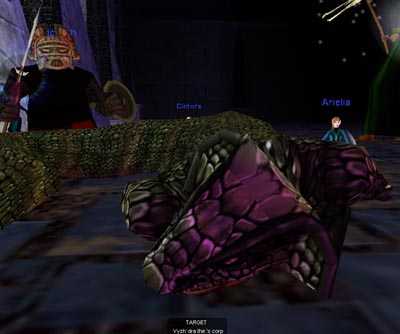 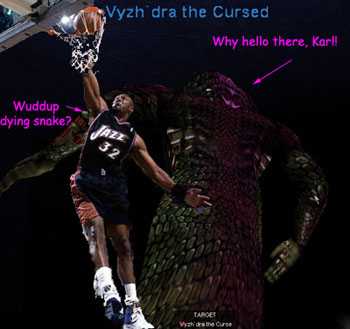 Karl hadn't paid a visit to the basement of Ssrae since they nerfed the Iksar Fanatics.  Karl used to hang out down there with his fungal tunic dinging 8 AA points a day but then someone wisened up and gave Karl a bit of the Wilt and before you knew it Karl was fed up with the basement.  Karl then moved on to soloing in FG but then they nerfed that too so he headed to AC and spent his time in the AE group.  One patch day Karl heard that the Cursed had been "retuned" so he went down to the basement to play ball with his buddy, Vyzh'dra.  Unfortunately all Vyzh'dra had to say about it was, "" and next thing Karl knew he was knocked *the fuck* out.  Then Karl tried his buddy one more time after patch day but once again his buddy only said, "" and after that Karl said, "Fuck this noise.  Let's blow this taco stand and hit up ToV for fast and easy lewtz.  Or maybe that poosae the Creator is up -- you know the one who should be rooted and drops BabyJesusLike items which have no business being on a mob so incredibly gimpified?"

So our hero, Karl, sort of gave up on the Cursed for sometime.  That whole patch message tomfoolery didn't bode well with Mr. Karl.  So when Karl heard that some of the other servers had taken over Beta testing Mr. Cursed (and to this day Karl can't figure out why the beta testing isn't done on Test Server) Karl decided that trying the Cursed wouldn't result in the usual wasted hour which could be much better spent camping insanely cruel and rare quest items for poorly designed timesinks.

But this time Karl found Vhyz'dra speechless!!!!  And this made Karl275 happy.  And before the day was done Mr. Vhyz'dra the Cursed found himself Mallowed~

Karl forgot to get a picture of the cloak -- wuwu~

Karl also wonders what the fuck is up with that ranger piece of shit.

I'll explain this one.  We head down to the basement and proceed to trigger the Glyphed spawn.  What do we get instead?  The Glyphed AND the Runed.  The both spawned at EXACTLY the same time in EXACTLY the same spot.  That was a fun split to do.

Well, I said I wasn't going to take any stalkers till Monday but a few snuck in on the other Screenshots so here these freaks are:

This last one isn't a stalker but I'm not quite sure what to make of it . . .